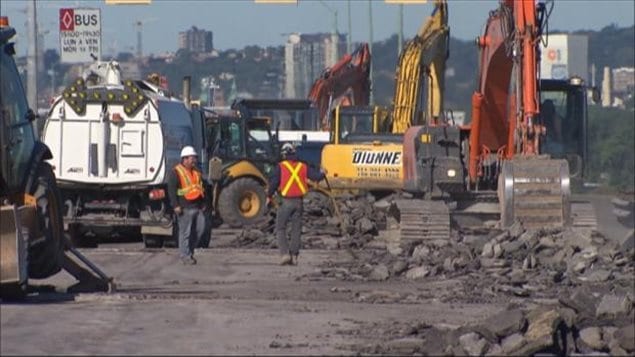 Quebec's probe of the construction industry is investigating possible links to organized crime and in the awarding of public contracts. Corruption in developing countries leads to donor fatigue for humanitarian aid projects as people see that the vast amount of money sent has resulted in little improvement in those countries.
Photo Credit: CBC

Conference to discuss effects of corruption and possible solutions

Toronto’s Osgoode Hall Law School (York University) is hosting a major conference on the issue of corruption on Thursday and Friday.

Magaret Beare is a professor of law and sociology at York University in Toronto, and co-organizer of the conference .

The conference is called, “Understanding and Taming Public and Private Corruption in the 21st Century”

Professor Beare notes that corruption, often associated with developing countries, is often a major issue in developed countries as well

She cites the case in the French-speaking province of Quebec where several city mayors and other public officials have been forced to resign amid a flurry of allegations and charges of corruption.

Since 2011, a major inquiry, the Charbonneau Commission has been looking into the awarding and management of public contracts in the construction industry in the mostly French-speaking province of Quebec.

Chief Counsel Sonia LeBel said, “Our goal is to investigate and to expose strategies of corruption and collusion in the awarding of public contracts in the construction industry, (to investigate) any links to the financing of political parties … and (to investigate) the possible infiltration of organized crime in the industry.”

It heard its 190th and final witness in September and is now in its consultative stage.

However, corruption is not limited to any province, country, or level of government.  York professor François Tanguay-Renaud  says of this and many other high-profile cases, “These events have demonstrated that no level of government, agency or corporation is immune from corruption schemes. This conference will reflect critically on some of those experiences and responses to them.”

The conference will discuss several issues related to corruption

Professor Beare notes that several of the speakers and panelists have particular and direct knowledge of the practices of corruption and its effects on society.

She says that through conferences like this and others which are continually shining a light on these issues,  will help bring about the necessary exposure.  This in turn could lead to the changes needed to, if not eliminate corruption, at least make it more difficult and risky to get involved, thereby reducing its spread and scope.