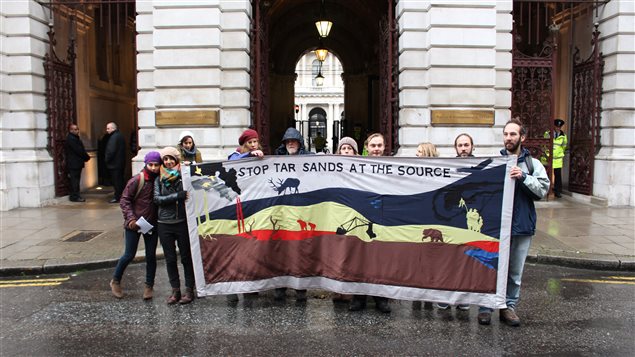 Demonstrators from five U.K. groups demonstrated against “the Canadian government aggressively promoting tar sands oil in Europe” in London, England today. They unfurled a banner depicting “the devastation” caused by oilsands development at an annual meeting of the Canada Europe Energy Roundtable.

The roundtable involved representatives of Shell Oil, the U.K. minister of state for energy and Canada’s deputy minister of natural resources and others. “What we’ve seen is that Canada has been using this meeting to gather together industry and U.K. diplomats in order to strategize and talk about how they’re going to push tarsands (oil) into Europe,” says Suzanne Dhaliwal, co-founder of the UK Tar Sands Network.

The banner was created by activists from Bristol and Oxford who she says “are concerned about what’s happening to human rights in Canada, to the environment in Canada, and also about how Canada has become an aggressive opponent of climate action in internationally.

Dhaliwal gave the example of what she called the Canadian government’s highly aggressive lobbying offensive to undermine the EU Fuel Quality Directive—a measure designed to reduce emissions from transport fuels which could have hindered imports from Canada’s oilsands.

“Also we’ve started to see imports coming to Europe now via Spain and so there’s a concern about getting hooked on tarsands oil when we should be really switching to more renewable energy,” says Dhaliwal.

Since 2009, a movement has been building in the U.K. to support those in Canada who oppose oilsands development, she says. “Our focus is on supporting First Nations (aboriginal) communities who live in ground zero. We work really closely with them…

“We know that the Canadian government, the (Prime Minister Stephen) Harper regime is repressive in terms of trying to push forward this project and undermining human rights, undermining your own climate legislation,” says Dhaliwal. “And so we just want to send a really strong message of solidarity.”