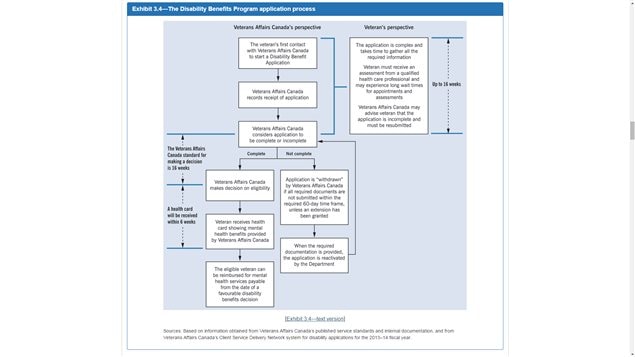 Long waits for veterans' mental health services are jeopardizing their recovery according to Canada's Auditor General. Veterans Affairs Canada also perceives the process as shorter than the veterans because it doesn't take into account the entire process.
Photo Credit: Office of the Auditor General of Canada

One of every five Canadian veterans suffering from a mental illness has to wait more than eight months before the government approves help, and such delays “may jeopardize a veteran’s stabilization and/or recovery”, according to the Auditor General of Canada in his fall report released Tuesday (November 25).

“The findings we have presented today…underscore the disconnect that happens when departments don’t have a clear understanding of whether the services they are providing are meeting the needs of their clienteles,” said Auditor General Michael Ferguson.

Among the report’s recommendations: “Veterans Affairs Canada should work with the Veterans Review and Appeal Board to identify whether reasons for successful reviews and appeals indicate a need to modify the application process.”

Journalist John Ivison at the National Post wrote “In essence, the report suggests the Department of Veterans Affairs is run like an insurance company – minus the facade of customer service that the industry presents.”

The role of the Office of the Auditor General of Canada is to “conduct independent audits and studies that provide objective information, advice, and assurance to Parliament, territorial legislatures, boards of crown corporations, government, and Canadians.”

In addition to the issue of mental health services to veterans, the fall report of the Auditor General also looked at support for combatting transnational crime, support to the automotive sector, and the documentary heritage of the Government of Canada, among others.