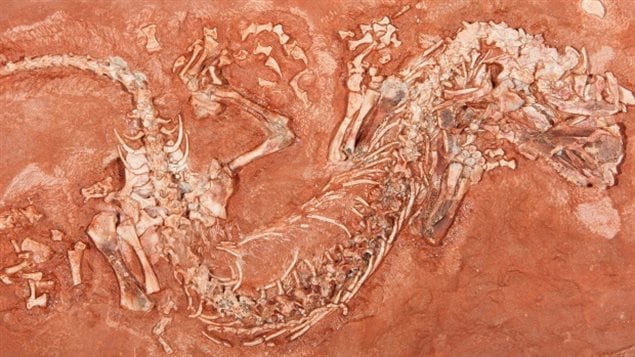 The new ancient reptile has been named Erpetonyx arsenaultorum after the family of Michael Arsenault who found the fossil on a beach in eastern Canada when he was a young boy.
Photo Credit: Courtesy Sean Modesto/Cape Breton University

A fossil of a lizard-like creature found by a boy 15 years ago, turns out to be the only reptile ever found from a period 300 million years ago, pre-dating dinosaurs. The fossil was named Erpetonyx arsenaultorum after Michael Arsenault who found it while on holiday with his family in the Atlantic province of Prince Edward Island (P.E.I.).

“Our animal is the only reptile known from this time period called the Gzhelian,” said Sean Modesto, a paleontologist at Cape Breton University and lead author of a new paper about the fossil.The specimen is 25 centimetres long with sharp, peg-like teeth which indicate it likely ate insects and small amphibians rather than plants.

The boy found the fossil on a beach in eroding rocks and paleontologists will return there this summer in  hopes the island’s typical red stone will yield more fossils.

When Michael found the fossil his father got a farm tractor and used it to free the fossil from the rock.  They built a box for it which the boy kept under his bed for several years, says a family friend.

The family tried to sell the fossil to a museum without success, but years later the Royal Ontario Museum in Toronto was able to buy it after receiving a large endowment dedicated to helping the museum buy artefacts for its collection

Once housed in the museum, it became available for scientists to study. Modesto collaborated with colleagues from ROM, the University of Toronto at Mississauga, and the Smithsonian Institution in Washington, D.C. to publish their study of the fossil in  Proceedings B of the Royal Society .