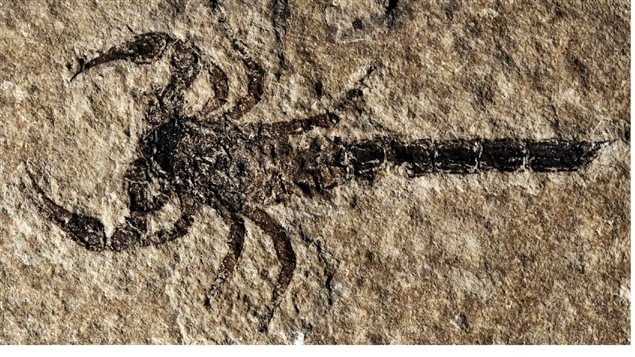 One of the advantages to living in Canada is the distinct lack of poisonous creatures: no poisonous fish, poisonous rattle snakes are very few, and very limited in their range, there may be poisonous brown recluse spiders in some areas although verification is lacking, and some very isolated black widow spiders,

In present day Ontario, one species certainly not found is scorpions, but that wasn’t always the case. Indeed a new, ancient, species has been found.

Rudkin and other experts have been studying a number of scorpion fossils that have been acquired by the Royal Ontario Museum over the past 20 years.

A report on their study appears this week  in the journal, The Royal Society- Biology letters

The ROM fossils have come from an area in the Bruce Peninsula  of southern Ontario which separates Lake Huron from Georgian Bay.

All scorpion fossils are rare as the creatures don’t really have a hard bone skeleton as do mammals, or hard shells like molluscs, so their carapace- made of chitin- usually disappears over time.

In this case, the fossils however are fortunately well-preserved and in their recent study of them the scientists determined these examples from southern Ontario are of a new species.

Scorpion fossils only date back to about 430 million years ago, and what this shows is that very early on in their evolution, scorpions began to evolve to live on land.  This is evidenced by this new species changed legs, such that they began to develop “feet” in order to support their bodies on land without the buoyancy of water to aid them.

Rudkin says they likely only spent a very short time on land or very shallow water, probably during moulting of their shells (which left the fossil remains) when they were most vulnerable to predators. As their new carapace began to harden they would return to the salt sea or salty marshes that covered the area hundreds of millions of years ago.

Rudkin says the discovery continues to add to our understanding of evolution’s time scale of the earth and of its creatures, including scorpions and how they moved from their marine environment to become land creatures.