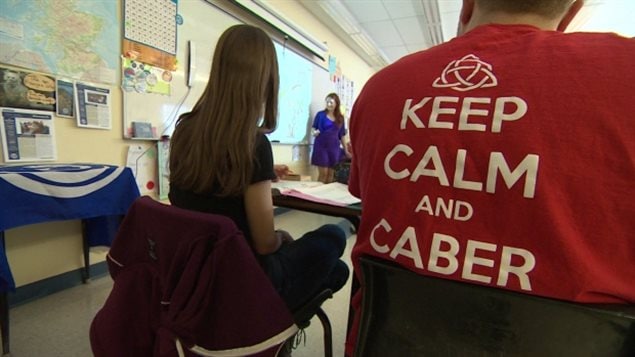 The Gaelic program at a Nova Scotia school baord has grown from one small extra-curricular class to a core language course with hundreds of students. (CBC)
Photo Credit: CBC

The 2011 Canadian census reported 7,195 speakers of “Gaelic languages” in Canada which includes not only Gaelic but Irish, Welsh and Breton as well. It is a miniscule percentage in a population close to 35 million, but about 15% of the population claims Scots/Irish descent.

Where once it was the third most common language in Canada, it almost disappeared, but now more young people are expressing an interest in learning the language of their ancestors.

For example, what started as a Scots Gaelic language class with just 15 students at one school in Nova Scotia has now quickly grown to 300 students in several grades at seven schools in the area around Antigonish where one can find street signs in English and Gaelic.

“I really wanted to connect to my family’s background because they do come from Scotland. Also I had heard my great-grandmother knew how to speak Gaelic, so I wanted to surprise her,” said student Allie Stewart speaking to CBC

Gaelic speakers were among the first explorers and settlers of Canada,

Indeed there is evidence that a Scot, Henry Sinclair in 1398, explored the coast of Nova Scotia long before Christopher Columbus, John Cabot, Jaques Cartier, Samuel de Champlian sailed to the New World

Gaelic was the mother tongue of Canada’s first Prime Minister Sir John A Macdonald, and by the mid and later 1800’s, Canadians of Irish and Scots descent outnumbered English and French, while Gaelic itself was the third most common language in the new country.

However, as parents saw English as the language of advancement and prosperity in society, Gaelic use declined over the decades until it was nearly extinct in Canada.

However, in pockets throughout the eastern maritime province of Nova Scotia, (New Scotland) especially Cape Breton, and to a lesser extent in Prince Edward Island, it has been spoken continuously for about two hundred years.

To support an increasing awareness of its celtic heritage, in 2006 the Nova Scotia government created the Office of Gaelic Affairs, in 2006 to assist in the promotion and development of Gaelic language and culture in the province.

In Prince Edward Island, the Colonel Gray High School now offers both an introductory and an advanced course in Gaelic; both language and history are taught in these classes. This is the first recorded time that Gaelic has ever been taught as an official course on Prince Edward Island.

The province of British Columbia is host to the ‘Comunn Gàidhlig Bhancoubhair’ (The Gaelic Society of Vancouver), the Vancouver Gaelic Choir, the Victoria Gaelic Choir, as well as the annual Gaelic festival ‘Mòd Vancouver’. The city of Vancouver’s Scottish Cultural Centre also holds seasonal Scottish Gaelic evening classes. Maxville in Ontario hosts one of the largest Highland Games events in Canada, although dozens of Tattoos and Highland games events occur annually all across the country

Many towns in Quebec were also  founded by Scots and Irish, although many of the English-language names have now been modified or erased completely; Maple Grove is now Bernierville, Lower Ireland is now St Jean de Brebeuf, Leeds is now St Jaques de Leeds, St Andrew’s East and Carillon are now combined as Saint-André-d’Argenteuil, Rosemere is now Rosemère

Irish Gaelic is also present in many areas with a large annual event in Tamworth Ontario. While Nova Scotia has a Gaelic College.