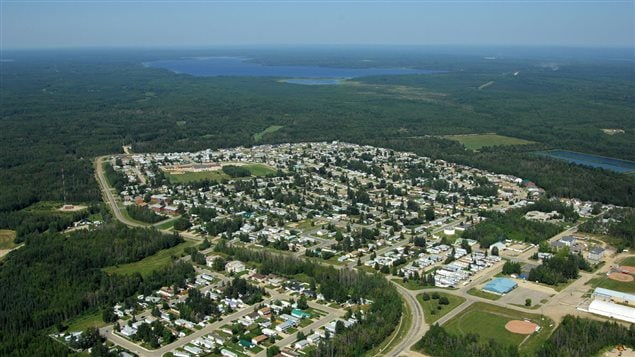 Hydraulic fracturing appears to have set off a swarm of earthquakes , including a 4.4 felt earthquake, near the Canadian town of Fox Creek, according to a report from The Tyee.
Photo Credit: Town of Fox Creek

Hydraulic fracturing has caused a series of earthquakes “including a record-breaking tremor with a felt magnitude of 4.4 last week” in the Canadian province of Alberta, according to an article on The Tyee website by journalist and author Andrew Nikiforuk.

In the article, Peter Murchland, a spokesman for the Alberta Energy Regulator confirms “The location of the earthquake is consistent with being induced by hydraulic fracturing operations,”

Fracking is a process of high pressure injection of liquid into the earth to extract oil or gas.

The western prairie province of Alberta has seen more than 400 small earthquakes between 1985 and 2010, reports Nikiforuk, but adds that “according to the Alberta Geological Survey, felt earthquakes are uncommon. ‘There have been fewer than 15 catalogued events greater than magnitude 3.5 since 1985,’ it has stated.”

Nikiforuk quotes 57-year-old Barb Ryan, a Fox Creek resident: “When we hit a magnitude of 3.8 this month, I’d thought for sure that the industry would stop and take a smoke break to figure out what’s going on,” said  “But they didn’t. Many are in denial here.”