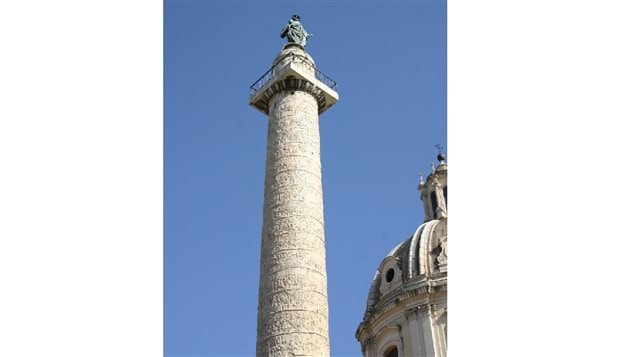 Trajan's Cloumn, circa 113 AD is covered in an ascending spriral of bas-relief scenes recounting life in the Roman Army and in its battles of Roman emperor Trajan against the Dacians,
Photo Credit: E.M. Greene

The impressive Trajan’s Column  has stood for almost 2,000 years in the centre of Rome. The column at 30 metres tall, has a helical frieze of 195 metres in length winding its way up the column.  For hundreds of years the many scenes depicted on the column have been studied and analyzed by legions of archaeologists and a wide variety of other scholars of ancient Roman history.

Elizabeth M Greene, assistant professor, Roman Archeology, Department of Classis, University of Western Ontario has been studying the role of women in ancient Rome, and it army. While in a museum studying plaster casts of the various scenes depicted on the column, she noticed something that seems obvious, but somehow has somehow escaped “legions” of scholars for so many decades.

Women have always been thought to have had no official role in the activities of the Roman army.

For example, common soldiers were not allowed to marry. While high ranking officers were allowed wives and families with them, it was again thought that they were relegated to remain behind the scenes.

In official ceremonies and religious rites however, boys, probably the sons of officers, were allowed to participate as assistants, holding the offerings.

Professor Greene, in studying the relief and particularly characters in scenes which had always been identified as boys, realized that six of them weren’t boys at all, but girls and women.

She says it could be simply a case of you see what you’re looking for, and it’s a detail most “military” scholars wouldn’t be seeking.

The professor at the university in London Ontario, who studies the Roman army and women’s roles, says these were probably wives and daughters of officers, and that women may have been more present that had previously been thought.

Recent discoveries at archaeological sites have turned up other evidence of women at camp sites, including things like shoes which clearly belonged to women.

In addition, almost half the plaques or “diplomas” given to provincial soldiers who had served 25 years with the army mentioned a wife and children.

Professor Greene says evidence indicates that there was probably a very large community that followed the army either established around its forts or following it on campaigns, with de-facto wives providing a number of services needed by the army.

This would especially be the case as stability in areas was established and actual towns evolved around forts.

Greene points out that the image of “camp followers” or prostitutes accompanying the army is very likely not nearly as prevalent as previously thought, whereas the presence of de-facto wives was in turn probably more prevalent, and that they would have had to work, providing services to augment the very low pay of their soldier/husbands.

In presenting her evidence to a major international gathering of archaeologists recently, it was agreed by all that there had been a long-standing misinterpretation, and that these were in fact women present during the campaign participating in the religious event.

She notes that because Roman Legions often engaged locals to augment their force, the army, and undoubtedly the surrounding support community connected to the soldiers, could be a fairly diverse, or “multi-cultural” as well.

She notes that as scholars continue to study and discover new things about Roman life, they are also continuing to discover how many aspects have come down through the centuries to either affect or are otherwise represented in present day situations, polical, social, and military.