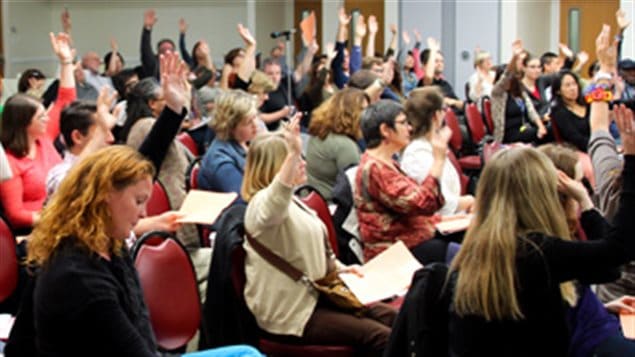 Elementary teachers in Canada's largest city of Toronto are 'devastated' by planned closures of schools which will not affect their own numbers, but, they say, will have a huge impact on students and their education.
Photo Credit: Elementary Teachers of Toronto

School closures in Canada’s largest city of Toronto will have a huge effect on poorer neighbourhoods and the community activities in those schools, according to the Elementary Teachers of Toronto (ETT) which represents 11,000 teachers in theToronto District School Board (TDSB).

An analysis report released by the teachers Monday (February 9) found that of the 60 schools slated for closure or reorganistaion because of financial concerns, 48 are elementary schools , with the majority expected to have enrolment increases.

The teachers’ analysis suggests that the decision to close these schools does not take into consideration the impact of forcing children to be bussed to schools elsewhere, nor the wide community use of the schools.

In an interview with RCI, the union underlined its concern was not about jobs, but about education quality and keeping students in school. Teacher numbers will not be affected by the closures, said the union,