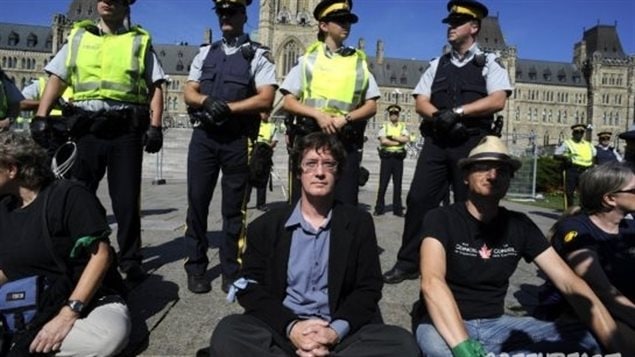 Climate policy researcher Keith Stewart (centre - at sit in) posted a blog on Greenpeace Canada's website voicing his concerns about an RCMP assessment of the 'anti-petroleum' movement and a new Canadian law that would give wide powers to the police.
Photo Credit: Greenpeace Canada

Caring about the climate is not a crime in Canada, yet, writes researcher

After reading a federal RCMP police assessment of the “anti-petroleum” movement as a growing threat to Canada’s security, Greenpeace climate policy researcher Keith Stewart at first laughed. But as he read the 40-page document, he became concerned.

His concern was heightened by the Canadian government’s intention to pass an anti-terrorism act, Bill C-51, which would give police authorities wide powers, including the right to commit illegal acts.

RCI’s Wojtek Gwiazda spoke to Keith Stewart about the blog he posted Tuesday (February 17) on the RCMP assessment and its impact. Stewart is a climate policy researcher and the Head of the Energy Climate Campaign at Greenpeace Canada.