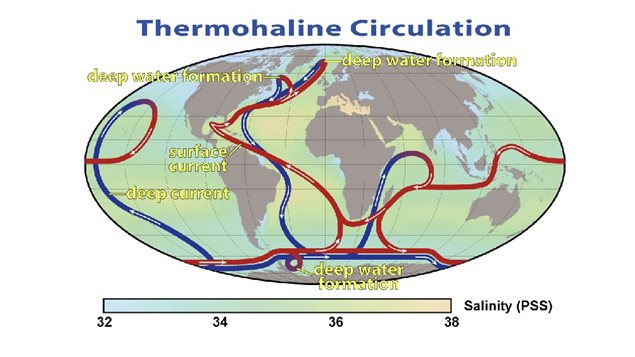 A somewhat simplified illustration of the major ocean currents and ocaan salinity showing the AMOC running to northern Europe with a branch to eastern Canada. 'As the warm current releases heat in the north, it cools, becomes denser, and sinks, taking oxygen to the deep ocean as it begins flowing back south.
Photo Credit: Robert Simmon, NASA. Minor modifications by Robert A. Rohde - NASA Earth Observatory-WIKI

The “Atlantic conveyor” current: Slowing down is not good

Most have never heard of it, although the better known “Gulf Stream” which flows along the east coast of the USA and then heads toward Europe is part of it.. The vast AMOC flows northward and is critical to those living in northern Europe and eastern Canada. New research says this ocean current is slowing down, and that could have very serious consequences for many millions of people.

Eric Galbraith (PhD) is an assistant professor in the Department of Earth and Planetary Science at McGill University in Montreal.

The “conveyor” is critical for a number of reasons not the least of which is the warm surface current bringing its warmth to northern Europe, making it much more liveable in that region than it would be otherwise.

It also however results in vast amounts of nutrients being brought up to the surface in northern seas where vertical mixing connect the top layer with the deep levels of the ocean. At the same time, this provides vital oxygen to mid and lower levels of the ocean needed for marine life at those levels.

Because it is such an important factor, scientists have begun studying it in relation to its affect on climate change, or how climate change is affecting it.  Also, because it is so vast, it is difficult to measure. However, studies have shown fluctuations in size and speed recently.

What was not known was if this was natural variation or not.  In order to establish trends, scientists began looking at archival weather records as a way of estimating the effects resulting from variations in the AMOC strength historically.

What seems to be happening is that because of climate change and warmer northern air than usual in the past few decades there is more rain falling (fresh water) in the north Atlantic, and more fresh water from glacial melt from the Greenland Ice sheet.  This decreases the density of  the water which makes it more difficult to “sink” into the deep sea.

The studies indicated the AMOC appears to be slowing. Although not conclusive, it would fit with theoretical models of what would happen under current conditions which are beginning to resemble conditions in the prehistoric distant past where the AMOC has been interrupted.

Professor Galbraith notes that once the current starts to slow, it begins a kind of feedback loop that  could result in a collapse such as what occurred during the ice age.

Once stopped, he says, it’s possible that it could take hundreds of years or longer to re-establish itself.