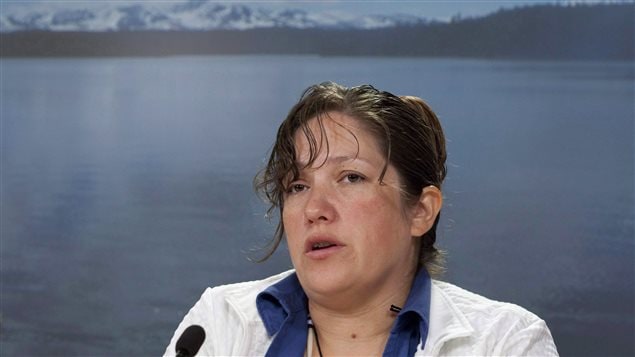 Former chief Marilyn Baptiste spoke at a news conference against a proposed mining project in western Canada on September 2, 2010. That and other action she took has won her a Goldman Environmental Prize.
Photo Credit: Adrian Wyld/Canadian Press

An indigenous woman who led the fight to stop a copper and gold mine on her territory has won a prestigious contest for grassroots environmental activism. Marilyn Baptiste is an elected councillor and former chief of the 400-member Xeni Gwet’in band in the western province of British Columbia.

Baptiste worked hard to oppose the Prosperity Mine which would have turned Fish Lake into a tailings pond. The lake is a source of spiritual identity and livelihood for First Nations in this area.

Baptiste presented and prepared comprehensive environmental, cultural and economic data at government environmental hearings on the project. She also set up a one-woman blockade to prevent construction crews from getting to the proposed mine site in 2011.

Her Goldman Environmental Prize is worth $175,000 and will be awarded this evening in San Francisco, U.S.

Indigenous groups in British Columbia have fought hard to obtain and protect rights to their lands. As Baptiste told Canadian Press, “”Our ancestors have passed the torch forward for us to continue to protect the land, our wild salmon, our way of life that is connected to the land, and our future generations. Mother Earth needs our help.”