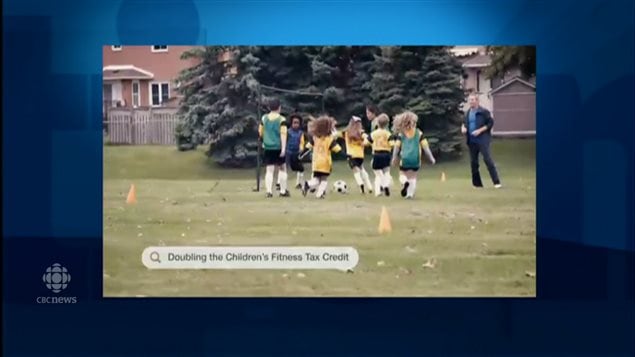 A government television ad touts a tax credit for children’s fitness, but the credit has not yet been approved by Parliament.
Photo Credit: CBC

Canada’s current government is spending millions of taxpayers’ dollars on advertising for its own partisan purposes in the run-up to an election expected in October, charge opposition politicians and citizens’ advocacy groups.

Government advertising should be used to explain programs that have already been adopted, they say. At issue is $13.5 million dollars slated to promote measures in a budget which has not yet been passed.

Dennis Howlett of the advocacy group Canadians for Tax Fairness told Canadian Press that public funds should not be used to push an agenda that’s still a matter of debate in Parliament, adding “it undermines democracy.”

“The concern is that all the parties try and raise money to run ads and promote their agenda,” says Duff Conacher, co-founder of the group Democracy Watch. “The ruling party, if they’re able to use taxpayer money…to really just promote themselves as opposed to promoting and educating people about government programs, then they have a huge advantage as a ruling party over opposition parties. And if they’re using that advantage leading up to an election it can essentially lead to an unfair election.”

He charges the ads are also misleading because they tout programs that may never come into existence.

There is a remedy for this in the province of Ontario, says Conacher. A law was passed at the provincial level of government giving the auditor-general the power to review proposed advertising and to disallow it if it is found to be partisan, misleading or promoting the ruling party. Conacher says a similar law is need in all jurisdictions in Canada.

So far 1,000 letters have been sent and Conacher hopes there will be many more.