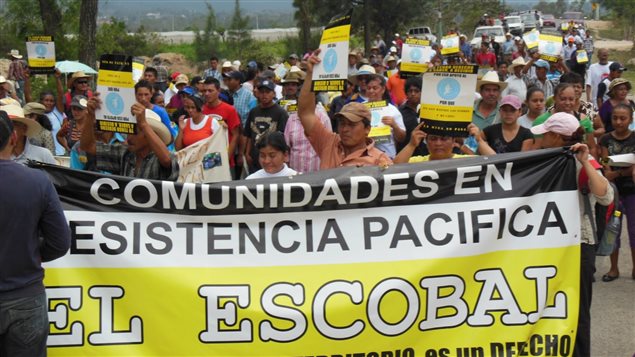 Vancouver-based Tahoe Resources mining company has been faced with years of resistance to its silver mining operation in Guatemala. Mining Watch Canada says two managers are presently in jail, one over an environmental issue, the other because of a shooting attack on protesters.
Photo Credit: Resistencia PACIFICA "El Escobal" website

A controversial silver Canadian mine operation in Guatemala continues to be resisted by the local community, despite a government militarization of the area to suppress resistance, and a shooting attack on protesters.

The Vancouver-based Tahoe Resources mining company has been faced with years of resistance to the mining operation which started in 2014. Two of its managers have been arrested, one over environmental issues, and one for involvement in the shooting attack of peaceful protestors.

According to Mining Watch Canada, the militarization by the Guatemalan government of the area around the mine to quell protests was also accompanied by the help of local Canadian embassy staff who apparently support the Tahoe operation.

In April, the Supreme Court of the Canadian province of British Columbia began hearings into the case of seven Guatemalan workers seeking to have a civil suit against Tahoe Resources after they sustained injuries in the attack on protesters.