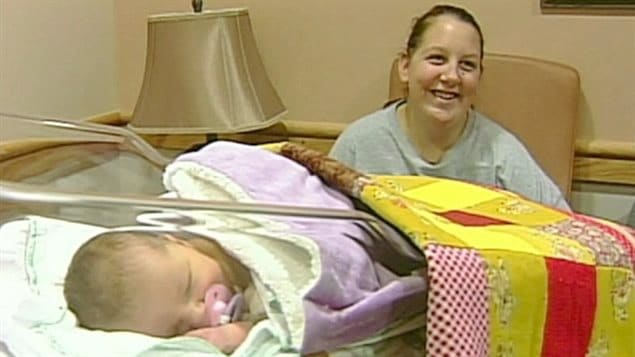 Western Canadian Josephine Anglin went to hospital with terrible back pain, not realizing she was about to give birth. An estimated one in every 2,500 births come after so-called “cryptic pregnancies.”
Photo Credit: CBC

How could you not know you’re pregnant?

The recent report that a Canadian woman unexpectedly gave birth on a commercial flight to Japan has prompted people to wonder how one could be pregnant and not know.

Pregnancy is usually a big deal featuring baby showers—parties where friends and family bring gifts for the expected child, the sharing of ultra-sound photos taken of the fetus, shopping for baby furniture, strollers and car seats along with lengthy discussions about feeding options, sleep management, day care plans and choice of names.

Perhaps mercifully, some women never get a chance to do all that because they don’t realize they are pregnant. It’s estimated this happens to as many as one in 2,500 mothers and there’s even a name for it—cryptic pregnancies.

The usual telltale signs are not always evident. Some women have irregular periods or continue to have them throughout pregnancy. Weight gain can be small or obesity can mask it. Some studies say that women sometimes are in denial and ignore signs that they are carrying a child because of shame or for other psychological reasons.

As for the couple with the new baby born on an Air Canada plane, the Canadian Embassy in Tokyo is helping out by arranging a passport for the infant and organizing some baby essentials such as a stroller.

People can sometimes be derisive of women who didn’t realize they were  pregnant, to the point that one woman in the U.S. started a support group for them.