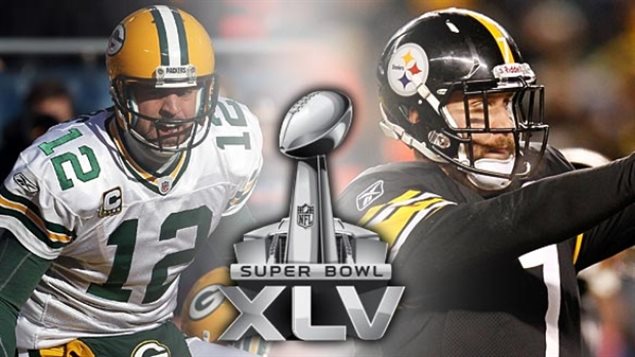 2011 Green Bay's Aaron Rodgers, left, and Pittsburgh's Ben Roethlisberger. The much hyped US Super Bowl is one of America's greatest games. but the US game came about thanks to Canadian rules.
Photo Credit: Getty Images- via CBC

Though American websites seldom, if ever, mention it, and American sportscasters probably don’t know it either, the origins of another of their greatest professional sports had come from Canada.

American sports history often cites an 1869 game between Rutgers University and Princeton as the origin of their game of “football”, but that was a rather different style of game which bore little resemblance to what we call football today, including for example, having 25 players per side. Its only real claim to fame is the start of intercollegiate sports. In the latter part of the 1800’s both the US and Canadian universities were playing a soccer-like rugby brought over from England. However the sport had evolved somewhat in the new world, and also evolved rather differently in the two countries.

What is now known as one of the Americans greatest professional sports, thus came about as a result of American exposure to the Canadian version of the sport.

Thus the decision was made to have the teams play two games, one by Harvard’s American rules, and one game played by Canadian rules.

On May 13 and 14, in 1874 two games were played in the US. The first was played using Harvard’s rules, which was a game more like soccer and using a round ball, the second was played using McGill rules, with an oblong ball.

The Harvard game was a soccer variation known as the “Boston Game.” This allowed a player to pick up the ball and run with it if he were chased, but if the pursuer stopped he would yell to the ball-holder who then had to throw or kick the ball.

As it turned out the Americans won the first game 3-0, while the second game with Canadian rules was a scoreless tie.

However, much more importantly for the US style game of today and extravaganzas like the Super Bowl, and all the others. the Harvard squad preferred the Canadian rules.

These included only fielding 11 players during a match, whereas the Americans usually played with 15 members (or more) on the field. Even today, American football only puts 11 members per team on the field.

The Harvard team liked the Canadian innovations to the game such as running with the ball, downs, forward passing, goal posts for a try, or touchdown, and tackling.  They adopted the Canadian rules and they then introduced them into a match with Yale the following year.

American sources tend to cite this all U.S. game as the start of American football, ignoring the fact that Canada was the source of the Harvard game.

The initial McGill-Harvard game. also marked the first time admission was charged at a college sporting event, with a 50 cent fee for spectators, which apparently would be used post game for “entertaining” the visiting Canadian team.   American college football now generates well over a billion of dollars in revenue every year.

In 1876 a formalized rulebook was created by US colleges as the new sport took a much different route from the sports of soccer and rugger (rugby), but one which had been very much influenced by the Canadian innovations.