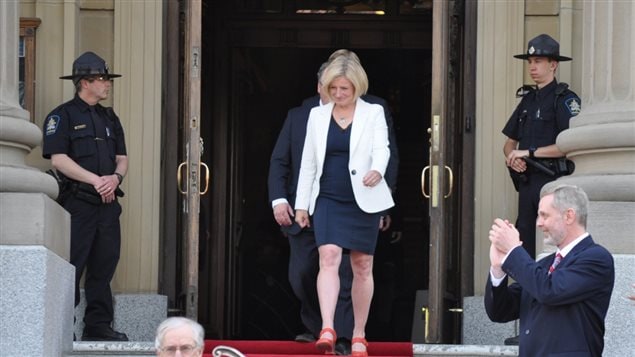 Rachel Notley, stepping out as the 17th Premier and first left-leaning NDP leader, of the province of Alberta
Photo Credit: CBC / Terry Reith

Rachel Notley, the 17th premier of the province of Alberta, demonstrated how new and different her government will be, by taking the “swearing-in” ceremony outside to the steps of the Legislature in Edmonton, and invited Albertans to attend.

And they came by the hundreds yesterday, filling the grounds in the warm sunny weather, that made the occasion more of a festival. During the ceremony, the 51-year-old former labour lawyer, could hardly hear herself speaking, with the crowds chanting her name.

In talking with reporters, following the swearing-in, Notley said she was “flabbergasted” by how many people showed up. And of her new cabinet; “Young and old, gay and straight, and more women than ever before,” Notley said, “My friends, it is springtime in Alberta and a fresh wind is blowing.”

Notley will have her first meeting with her cabinet in Calgary, on Thursday.