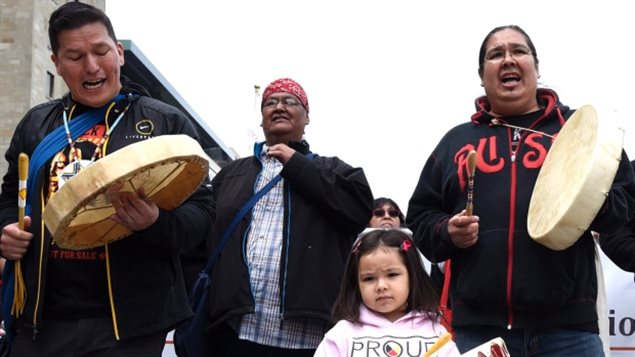 A child stands with drummers as they lead the Walk for Reconciliation with thousands or participants, part of the closing events of the Truth and Reconciliation Commission on Sunday in Ottawa. The commission uncovered horror stories of homemade electric chairs, malnutrition experiments and the deaths of more 6,000 children in residential schools.
Photo Credit: Justin Tang/Canadian Press

After six years of hearing testimony, the Truth and Reconciliation Commission (TRC) wrapped up hearings this week in the national capital, Ottawa.

A summary of the final report is expected to be released tomorrow.

The commission was set up to hear about the experiences of Canada’s aboriginal peoples forced to attend the so-called residential schools.

Canada’s Prime Minister Stephen Harper gave a formal apology to Canada’s Aboriginal populations on June 11, 2008 and set up the Commission. The idea was that this would help mainstream Canada to better understand the actions and consequences of residential schools and allow aboriginal victims an outlet to express their feelings and pain.

Thousands of witnesses were heard, many recounting horror stories of physical, sexual, psychological and emotional abuse while at the schools, usually far from homes and families and for extended periods.

Originally set up in the 1840’s by various Christian organizations, the concept was based the thinking at the time that aboriginal peoples would be best served by assimilation into the mainstream. By the 1880’s the government expanded its role and created a residential school system which by 1920 forcibly took children starting at age 7, and placed them in the government funded, mostlry church-run schools Children often didn’t see their families again for months or even years, and the schools operated with virtually no outside oversight, leading to widespread abuse of the children.

Children were not allowed to speak their own languages or exhibit any acknowledgement of their heritage and culture, and faced often severe punishment for infractions of these and other strict rules.

At its height there were some 130 schools receiving funding from the government, about 60 percent of the school operated by the Catholic Church.

Although many residential schools were closed in the latter part of the 20th century, the last school closed in 1996.

Some 150,000 aboriginal children are estimated to have gone through the system.  Among the many horrific tales heard was the fact that about 6,000 children died while attending the schools, although the numbers may be higher as records were poorly kept by the schools.

The echoes of the system where children, isolated from their own nurturing family and often subject to a variety of abuses, has meant that many haven’t the knowledge or ability to raise their own families causing further social problems in communities across Canada.

The commission was set up in June 2008. However it has not been without troubles as the original chairman Justice Harry S. Laforme of the Ontario Court of Appeal resigned only a few months later citing insubordination from the two other members.

Although they tried to stay on, they eventually resigned in January 2009.  In June, Justice Murray Sinclair, the first aboriginal associate chief justice in Manitoba took the chair with two new commissioners to complete the tribunal.

After hearings in several Canadian cities, a 300 page summary of the report is expected tomorrow.

In an interview on CBC, Justice Sinclair “evidence is mounting that the government did try to eliminate the culture and language of indigenous people for well over 100 years.”

Along with its recommendations, the report is also expected to argue that Canada’s treatment during the residential school era be deemed “cultural genocide”.

After years of work, and a final report expected to stretch to six volumes, many aboriginals are wondering if the effort has led to any reconciliation or advancement.

What is the TRC- (Globe and Mail)