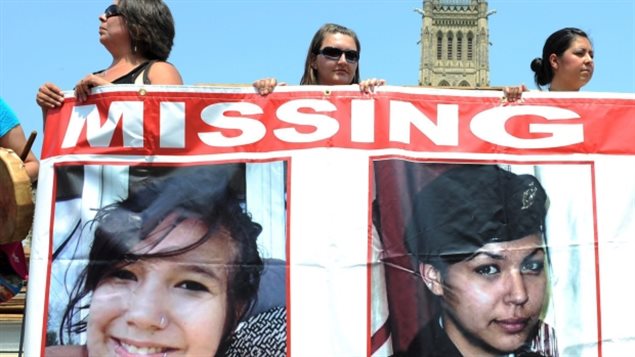 A Sisters in Spirit rally on Parliament Hill in Ottawa on Oct. 4, 2013 was held to remember missing and murdered aboriginal women such as Maisy Odjick (left) and Shannon Alexander (right) and renew calls for a national inquiry.
Photo Credit: (Sean Kilpatrick/Canadian Press)

For years all across Canada there have been many cries for a national inquiry into the issue of missing and murdered aboriginal women, and for years the federal government has said it is a police matter.

In 2014, Canada’s federal police agency, the Royal Canadian Mounted Police (RCMP), released a report   saying all indigenous women murdered since 2013 in areas where they police, were killed by men in their own homes, or in their communities.

At a news conference in the national capital , Ottawa, June 19 where this year’s updated report was released,  RCMP Deputy Commissioner Janice Armstrong said, “Our 2015 update confirms the unmistakable connection between homicide and family violence, and that Aboriginal women continue to be over-represented among Canada’s missing and murdered women,”

However, in spite of many claims the RCMP does not devote the same amount of time and energy into solving homicides or missing aboriginal women, the police force has insisted that its solution rate for homicides are almost the same.

A new 2015 report says that it solved 81% of homicide cases of aboriginal women, comparing closely to 83% for non-aboriginals.

Recently aboriginal leaders were angered when Aboriginal Affairs minister Bernard Valcourt in closed-door meetings with Aboriginal leaders this past March is alleged to have said that 70 per cent of the murdered and missing women issues “stem from their own communities”.

Several aboriginal chiefs called for  Minister Valcourt to be fired for blaming aboriginal men for the tragedy, a position they dismissed as unsubstantiated and demeaning.

RCMP Commissioner Bob Paulson then wrote to Ms Bernice Martial, the Grand Chief of Treaty Six in central Saskatchewan and Alberta, backing up the Minister’s comment.

He said the RCMP hadn’t previously released specific information on ethnicity in the spirit of “bias-free policing” but that “The consolidated data from the nearly 300 contributing police agencies has confirmed that 70 percent of the offenders were of aboriginal origin, 25 per cent were non-aboriginal, and five per cent were of unknown ethnicity.”

The data said in 62 percent of cases the killer was a spouse, family member, or intimate relation, but that in fact, those close relationships were actually higher, 74 percent, in non-aboriginal cases. He said this familial relationship was more important to policing than specific ethnicity.

Despite the RCMP statistics, Ms. Martial remained unconvinced.  Quoted in the Globe and Mail newspaper she said, “The RCMP is under the federal government, they have to comply with their policies and whatever they are told, they have to do. What I would like to see is an independent national inquiry.”

The RCMP meanwhile says it is working more now towards addressing prevention efforts in stopping violence in family relationships.