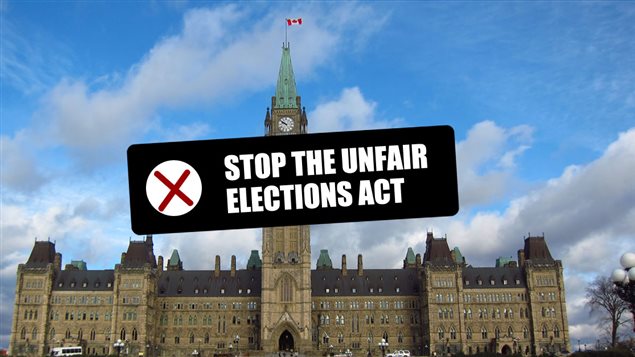 The Fair Elections Act is being challenged today in Ontario Superior Court in order to ensure as many as 400,000 Canadians can vote in the upcoming federal election.

The Council of Canadians, the Canadian Federation of Students, and three voters are seeking an injunction to suspend key provisions around identification requirements of the Harper government’s so-called Fair Elections Act.

“There is nothing fair about this Act”

In a press release Maude Barlow, national chairperson of the Council of Canadians, said, “There is nothing fair about this Act, This voter suppression legislation will deprive tens of thousands of eligible voters of their right to vote, with a disproportionate impact on youth, seniors, Indigenous people, new Canadians, the homeless, and people with disabilities. As long as this legislation remains in place our elections will be anything but fair.”

Dylan Penner, spokesperson for the Council of Canadians, says the ‘Voter Information Card’ a postcard-sized document sent to all Canadians eligible to vote, was used as valid identification by more than 400,000 people in the last federal election.  Some of these people may be people without driving licenses, for example. To disenfranchise such a large block of potential voters is a major concern.

In the COC’s press release, Garry Neil, Executive Director of the Council of Canadians, said: “In the 2011 federal election, fewer than 7,000 votes made the difference between a majority and minority government. If the new rules are not set aside, the very legitimacy of the 2015 election will be at risk.

Elections Canada would need a ruling by July 20th to make the necessary changes.