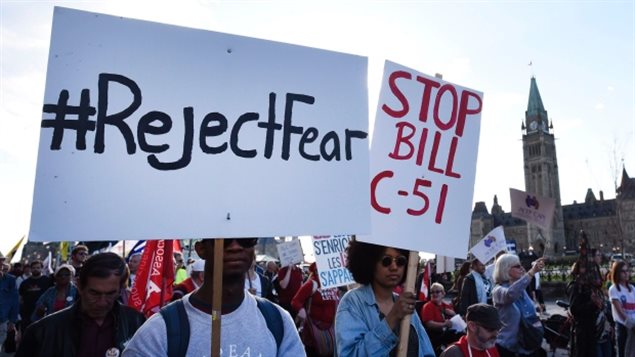 Rallies were held across Canada this spring to protest against the Conservative government's Anti-Terrorism Law; here a really in Ottawa with the federal Parliament buildings in the background. Now two groups have launched a court challenge, arguing C-51 violates Canada's Charter of Rights and Freedoms.
Photo Credit: Justin Tang/Canadian Press

It was known as Bill C-51- the anti-terrorism act, but it was passed into law in June of this year, in spite of loud protests and demonstrations across the country.

Critics, which include former Prime Ministers and Supreme Court Justices, say it gives the government far too many intrusive powers, does not necessarily increase security, and allows for little to no oversight of police and security service operations.

Two groups , the Canadian Civil Liberties Association (CCLA) and Canadian Journalists for Free Expression (CJFE)  have filed a challenge to the law, saying it violates the Canadian Charter of Rights and freedoms.

Tom Henhoffer is the executive director of the CJFE, I reached him on mobile phone in Toronto.

The groups say the law contravenes several Charter sections and is unconstitutional in that it reverses the role of Canada’s courts and system of justice.

The notice of application in the court challenge says the measures amount to “an extraordinary inversion” of the time-honoured role of the courts and the principles of fundamental justice by asking the judiciary, and not Parliament, to authorize limits on charter rights “as opposed to protecting such rights and preventing their violation.”

Civil liberties groups also say the law gives police and security forces such as the Canadian Security Intelligence Service (CSIS), sweeping new powers of investigation and censorship which go far beyond its role of information gathering.

In a press release, Henhoffer said the new law, “is a grave threat to our rights in Canada. It will lead to censorship and a massive chill on free expression, and enables a potentially widespread abuse of power. It unjustifiably infringes on the rights of all Canadians without making our country any more secure.”

The CJFE also particularly objects to aspects of the new law whereby journalists who quote terrorists in their articles or link to terrorists sites, could in theory be charged with a criminal offence.

The new law expands the “no-fly” list powers while increasing secrecy of why people are put on the list.  The groups also say that privacy is being compromised as personal information held by any one agency of government can now be shared among government agencies.

The challenge will address five key components of Bill C-51, which violate the Charter unjustifiably and must be struck down. These components feature amendments to

Sukanya Pillay, Executive Director and General Counsel of the Canadian Civil Liberties Association. “It creates broad and dangerous new powers, without commensurate accountability, and this can result in serious mistakes.” She continued, “Some of the powers granted by Bill C-51 are secretive in nature, so the public may never know if and when Canadians’ rights are being violated, though individuals will be faced with the fallout

The challenge has been filed in Ontario Superior Court. It has the potential to make its way through higher courts to the Supreme Court. That would depend on whether the current government wins the upcoming federal election in October and decides to appeal in the event of a decision against it.

In the meantime the provisions of the law are now in effect.