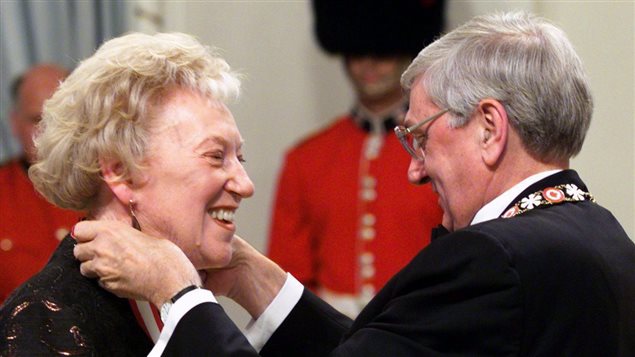 Flora MacDonald is promoted to companion in the Order of Canada by Governor General Romeo LeBlanc in 1999. She died Sunday at the age of 89.
Photo Credit: CP Photo / Tom Hanson

Flora MacDonald, the first woman to hold the Canadian Foreign Affairs portfolio, has died at 89.

Ms. MacDonald was a long-time stalwart in the Canadian Parliament and served as a senior cabinet member in two Conservative governments.

She was in charge of foreign affairs under Prime Minister Joe Clark during the Iranian hostage crisis in 1979 and 1980 when Canadian diplomats hid six Americans at the Canadian Embassy in Tehran.

After Brian Mulroney was elected prime minister in 1984, Ms. MacDonald held the posts of Minister of Employment and Immigration and Minister of Communications.

Born in 1926 in Cape Breton, Nova Scotia, Ms. MacDonald was first elected to the House of Commons in 1972, representing the Ontario riding of Kingston and the Islands.

She held the riding until 1988. Following her defeat, she retired from politics to concentrate on humanitarian efforts, touring the developing world as a human rights observer.

She also hosted a television series on Third World Development and made at least 12 visits to Afghanistan with the organization Future Generations.

In 1992, She received the Order of Canada, where she was cited for her “distinguished leadership in federal politics” and her humanitarian work. She was promoted to companion in the Order in 1999.