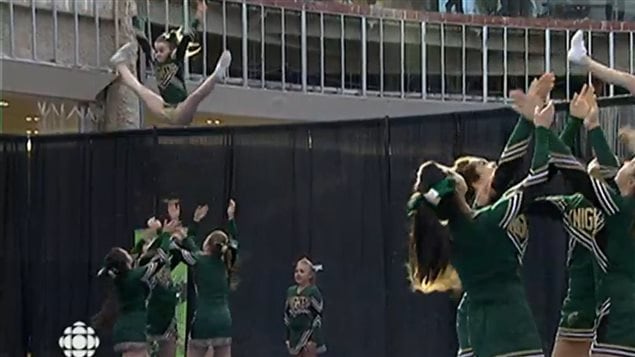 Cheerleading figures have become more complicated with girls being thrown into the air and causing more injuries.
Photo Credit: CBC

Cheerleading is becoming more popular in Canada and at the same time the number of injuries has doubled in the last 20 years, according to a recent study.

‘Throwing a person in the air’

“It’s a sport where… you usually have two bases and a back that are supporting flyers—someone who is on top. And they’re throwing the person in the air, making body pyramids. And the figures are becoming increasingly more difficult because the sport is becoming more recognized,” says Isabelle Hardy, a fourth-year medical student at the University of Montreal and co-author of the study.

As a past cheerleader herself, Hardy noticed that injuries were common. Her study found that most were minor often involving sprained and strained wrists incurred by those who lifted the flyers. She found a four-per-cent concussion rate which she says “is quite a lot especially considering cheerleading is mostly for a young population” and that concussion has long-term consequences on child development.

Although there was a very low incidence of serious injury, Hardy says the study indicates a need for more safety measures in the sport. She suggests things like requiring mats or spring flooring, and ensuring that figures are appropriate for the ages of the cheerleaders.

A call for national safety standards

Rather than have each province bring in rules which could differ, she suggests there be a standardized, national policy for the whole country.

“Cheerleading is a great sport. It’s really fun,” says Hardy noting that it’s often difficult to get adolescent girls into organized sports. “I think when you’re a teenage girl…you get to wear a pretty uniform, do your makeup and hair, and then you’re super athletic, you do gymnastics. So it’s great. That’s not what we want to discourage.

“We really want to make sure that the coaches are trained, that the children know what kind of injuries they should be looking out for. But really, parents should not discourage their children from participating. I think it’s a great activity.”