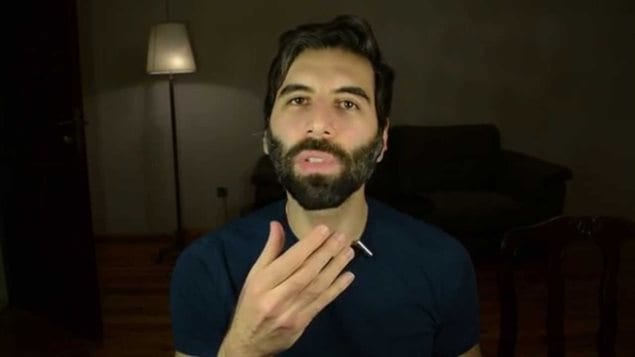 Daryush Valizadeh, known as "Roosh V," is set to deliver talks in Montreal and Toronto on Aug. 8 and Aug. 15 respectively.
Photo Credit: Youtube

Roosh V, petition against his appearances in Canada

Daryush Valizadeh, who blogs under the moniker ‘Roosh V’, has been contracted to deliver two talks in Canada; in Montreal on August 8th and Toronto on the 15th.  But a growing protest is demanding he not be allowed to enter the country.

The American blogger, also known as “the pick-up artist” advises men on how to convince women to have sex with them. It’s how he does this that some women find so objectionable.

“There’s certainly an argument to be made.”

“5 Reasons to Date a Woman with an Eating Disorder” is an example of the posts on a website he also edits. He contends that non-consensual sex in a home should not count as rape, and that all public rape allegations are false, according to statements he’s made.

“His goal is to paint a picture of someone who is vulnerable and might be an easier target” according to Fannie Gadouas, a Concordia University student. In an interview with CBC Radio last Friday, she encouraged people to sign a petition against his entry into Canada.

“He’s basically suggesting that if a woman consciously takes a decision to walk into a private space with a man, she would be knowingly putting herself in a situation where she could be raped,” she said.

Hate speech, under Canadian law, must cause a risk to a group of people. Constitutional lawyer, Mathieu Bouchard said Canada Border Services Agency may have grounds to stop him from entering the country. He says, “There’s certainly an argument to be made.”

The locations of the talks have yet to be announced, and Roosh V, for the moment, is relishing the publicity. We’ll talk to the organizer of the petition, to find out more.