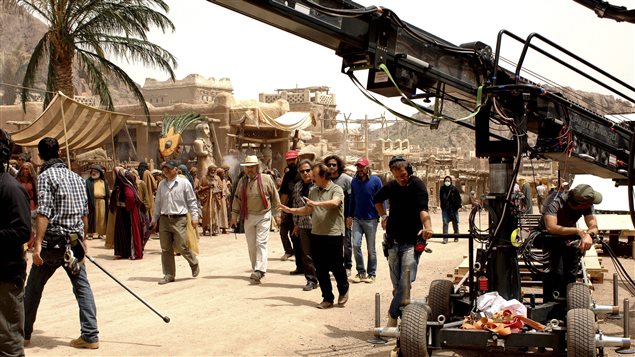 Iranian film maker Majid Majidi, center, director of the film “Mohammad, Messenger of God”, conducts a scene in Allahyar village 70 kilometers south of Tehran, in January 2013. In Islam, portraying the Prophet Muhammad has long been taboo for many. In the new 190-minute film, the story focuses on Muhammad’s childhood, never showing his face. The movie instead focuses on others to tell his story.
Photo Credit: AP Photo/Nourtaban Film Industry / Mohammad Foghani

The Montreal World Film Festival will be opening with the world premier of ‘Muhammad: The Messenger of God’. The Iranian blockbuster is directed by Majid Majidi, who has been a familiar presence at the festival, as a three-time winner of the Grand Prize of the Americas. His new film tells the story of the Prophet as a boy.

Majidi said he, and a research team of historians and archaeologists, consulted with Shia and Sunni scholars from Iran, Algeria, Morocco, Lebanon, and Iraq, to ensure an accurate portrayal of Muhammad’s childhood.

Henry Welsh, director of communications for the festival, said there is a Qatari delegation coming to see the film as they are interested in producing a version of their own. This depiction of Muhammad before his divine status, is not supposed to raise controversy, but time will tell.

‘Muhammad’ is part of the the “World Greats Section” which includes an impressive list of films from around the world, including the Italian film, ‘Latin Lover’ by Cristina Comencini, and the U.K.- Lithuanian co-production ‘Gitel’ by Robert Mullan, as well as the American film starring Robert Redford, Nick Nolte and the Appalachian Trail.  It’s called ‘A Walk in the Woods’ and is directed by Ken Kwapis.

The “other” film festival in Canada, the MWFF is the oldest, and is said by many to be in its final hours, but somehow it manages to continue and this year, has an interesting collection of events. David Puttnam will be honoured for his contribution to cinema, with such titles as ‘Chariots of Fire’, ‘The Mission’ and ‘Midnight Express’ to name a few.

Chinese cinema will be featured in a series called ‘China Meets the West in Montreal‘, and for Henry Welsh, and many other cinephiles, the screeing of the Karel Zeman‘s film, ‘Invention for Destruction’, will be a high point.