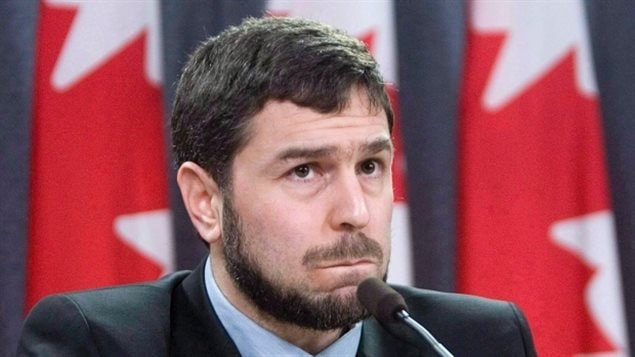 Syrian-born Canadian Maher Arar was tortured in Syria after being deported by U.S. officials in 2002. Canada awarded him $10 million in compensation for its role in the case.
Photo Credit: Tom Hanson / Canadian Press/file photo

Canada’s national police, the RCMP, have charged a former Syrian military intelligence officer for alleged involvement in the torture of Canadian Maher Arar more than a decade ago.  The whereabouts of Col George Salloum are unknown.

Arar, a Syrian-born Canadian, was in transit through New York in September 2002 when he was detained by U.S. authorities and deported to Syria. He was held in a grave-like cell in Damascus and, under torture, made false confessions about supposed collaboration with al-Qaeda.

One year later Arar returned to Canada and public pressure forced the government to hold an inquiry. It concluded that faulty information the RCMP passed to the United States very likely led to Arar’s ordeal in Syria.

In 2007 Arar was awarded a $10-million settlement from the government of Canada and got an official apology from the prime minister. In 2005, Arar lodged a complaint against Salloum with the RCMP and he worked extensively with police to try to bring him to justice.

Amnesty International Canada has long championed Arar’s case and today called the laying of charges against Salloum a significant human rights milestone. A news release says it “sets a ground-breaking precedent—nationally and internationally—in the critical campaign to end impunity that has long shielded torturers around the world.”

This is the first Canadian charge for torture allegedly committed abroad.