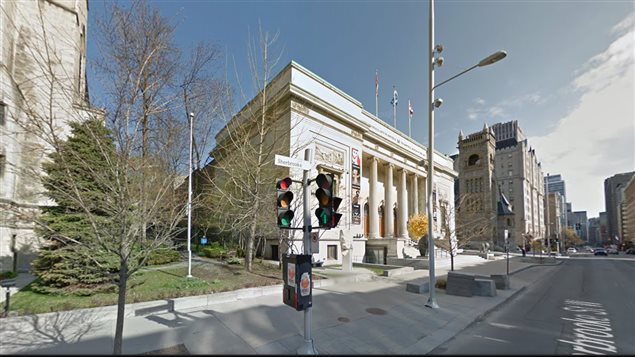 The 1912 Beux-Arts building in Montreal, scene of the biggest art theft in Canada, and still unsolved. AT the time a large tree grew beside the building allowing one of the theives to climb up and gain access to the roof
Photo Credit: google street view

The Museum had been established by Montreal’s English-speaking elite, but in thelate 60’s and early 70’s many Anglophones had moved out as the Francophone Quebec separatist movement, including violent terrorist bombing, began to grow.

With its financial base gone or leaving, the museum was struggling financially, and upgrades to the old building and security system were lacking.

In the blackness of the very early morning of September 4th, 1972, a darkly clothed man put on lumberjack, or linesman spikes on his boots and climbed a tree beside the 1912 Beaux Arts building and clambered over to the roof where the collection of the Montreal Museum of Fine Arts was housed.

He then lowered a long ladder left on the roof to accomplices waiting the equivalent of three-stories below.

They trio then entered via a skylight that had been under repair for some time. They lowered a rope and slid down several metres into the high ceilinged gallery.  The skylight alarm had been disabled as workmen had tossed a plastic tarp over it.

The three had begun collecting paintings, jewelry, and other objects, when a guard making his rounds saw them.

The robbers ordered him to the floor, when he hesitated, two shotgun blasts into the ceiling changed his mind. Two other guards then immediately ran to the scene but facing the armed bandits, were stopped, and also gagged and tied up. With one armed robber guarding the captives the other two continued their collecting.

In 30 minutes they were done.  Using a guard’s key, they entered the garage where the museum panel truck was parked but in doing so they accidently set off an alarm on a side door. They had already staked a number of paintings by the truck but when the alarm sounded, apparently took off of foot to a nearby car with what they could carry, leaving about 20 other valuable paintings behind.

What they took however included antique jewellery, figurines and 18 paintings worth a total of about $2 million at the time. Among the stolen booty are paintings by Delacroix, Gainsborough and a rare Rembrandt landscape estimated at $1 million.

In 1992 a Montreal TV show talking about the robbery estimated the value at around $20 million.

“They were discriminating thieves and had a fairly good idea of what they were looking for,” said museum spokesman Bill Bantey at the time.

It was known that two of the robbers spoke French, one English and a week into the investigation police suspected a group of students at the neighbouring Ecole des Beaux-Arts and had them followed for two weeks, but without making any arrests. Some police suspected the robbery was the work of experienced international thieves. The construction workers were also questioned but that was inconclusive.

The culprits later tried to ransom the paintings back to the museum for  $500,000, later negotiated down to $250,000. An envelope with photos of the works was sent as proof the museum was dealing with the actual thieves.

Further proof was demanded and the thieves directed police to a locker at the Montreal central railway station. There they recovered a painting by Brueghel the Elder (now re-attributed as belonging to the School of Brueghel).

A meeting was arranged between the robbers and an insurance adjuster, actually an undercover policeman, for the exchange of $5,000 for one of the paintings.  That fell through when a squad car from a neighbouring district drove by the site. Later an angry robber called and said they’d been set up.

Much later, the chief police art investigator, Alain Lacoursiere, said the arrangement was probably a smokescreen to cover up the fact the paintings may have already been moved and sold in Europe, Costa Rica, South America or elsewhere.  He said the exchange was arranged in a large open field near a little travelled area and the thieves would have easily noticed any police cars moving into position nearby and so

Insurance companies posted a $50,000 reward, but eventually had to pay out $1.9 million to the museum.  The Bruegel was the only work ever recovered.

Experts now wonder, and fear, the works may have simply been destroyed as they are too well-known to be sold.

A few years ago, Lacoursiere received an email with a video link from one of the students he had suspected and who, shortly after graduating had the funds to buy a house and a business. The email appeared to be a tease as the video showed a car commercial highlighting Mercedes cars used in a bank heist set in Hong Kong.

The stolen works, if still in existence, are now the property of the various insurance companies and a substantial reward still exists for information or their return.

Why this huge and daring robbery was almost immediately displaced from the news and has largely been forgotten in Montreal, in Canada, and worldwide is understandable.   The very next day Palestinian terrorists murdered Israeli athletes and started a drawn out hostage taking at the Munich Olympics.

With files from Catherine Schofield Sezgin-ARCA