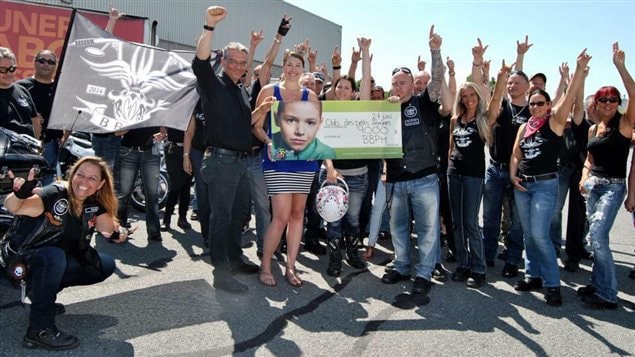 Riders presenting a cheque for the first $9,000 they raised.
Photo Credit: Martin Duhamel via Facebook

The man behind the campaign hopes to attract more donations as a video about the initiative goes viral.

Covered in tattoos, riding his Harley, Martin Duhamel may look all tough, but he is a softie. You get that sense when the 35-year old tattoo parlour owner talks about children who go hungry in Quebec. 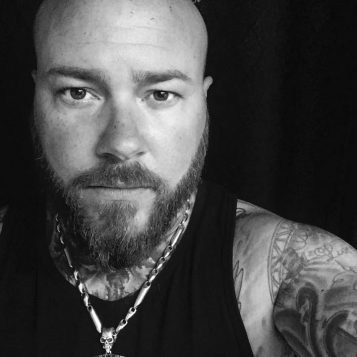 But Duhamel is serious about helping the helpless through an informal motorcycle club he founded a year and a half ago, Bbpm Moto.  It was initially but a small Facebook group that grew to 18 thousand members.

The aficionados from all over the province meet for rides and gather for all sorts of events.  From the start though, their passion would also serve a purpose.

In Canada, as many as one in seven children go to school on an empty stomach.  Picking a charity was easy for Duhamel, who speaks about their plight with a mix of outrage and disbelief.  “No kid asked to be poor and they all need to eat.”

Bbpm Moto began saving proceeds from organized activities and the sale of t-shirts and over a year, it managed to raise more than $45,000 for the Breakfast Club of Canada, an organization that has been providing a healthy morning meal to students in schools across the country for two decades.

Duhamel felt it could have been much more had media outlets responded to his repeated calls for coverage.  In a video to thank those who gave time and money in recent months, he expressed his frustration.  It hit a chord, having been seen more than 800,000 times as of Friday afternoon.

The young man received 1,058 messages, from people offering words of support or wanting to pitch in.  And he spent two sleepless nights responding individually to each and every one of them.

Why is he so committed?

It may surprise some to know that Duhamel does not have children himself.  Well, not his own anyway.  “Now I have 40,000 kids. I love doing this, I love the smile on children’s faces.  It is worth every minute of my time, every penny I can put into the cause.”

And it was worth enough to take up ‘real estate’ on his body.  Among Duhamel’s many tattoos: the Breakfast Club’s logo.  “I got it under my skin now.”

To listen to the interview with Martin Duhamel: