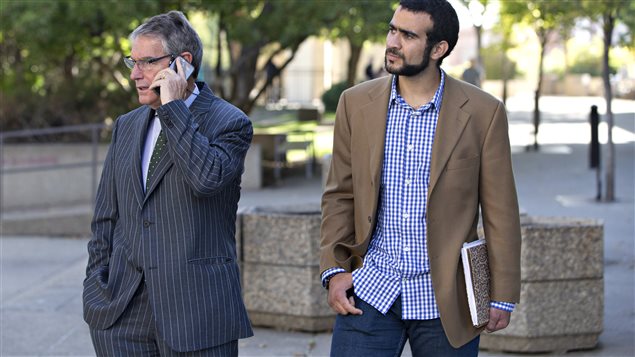 Former child soldier and Guantanamo Bay detainee Omar Khadr was in court in Edmonton on Friday to ask that some of his bail conditions be relaxed.

The judge consented to extending his curfew so that he could attend early-morning prayers and night classes to become an emergency medical technician.

But Justice June Ross is taking time to consider Khadr’s requests to have his electronic monitoring bracelet removed and to visit his family unaccompanied in Toronto.

According to his bail conditions, the 29-year old must communicate with his relatives in English only and under supervision, because of the views some of them have expressed in the past with regards to terrorism.

In an affidavit, Khadr said his grandmother is unwell and his grandfather barely speaks English.

Lawyer Nathan Whitling argued that his client’s bail conditions were “no longer necessary or in the public interest”.

Omar Khadr, who was transfered from Guantanamo Bay to a prison in Canada in 2012, was released on bail this past May while he awaits an appeal of his conviction for war crimes in the United States.

At 15, the son of an alleged associate of then al-Quaeda leader Osama bin Laden, he was involved in a firefight with U.S. troops in Afghanistan.  One soldier was killed and another was blinded in the firefight.

Khadr will be back in court in a week for the judge’s final decision on his bail conditions.

With The Canadian Press.

CBC Documentary: Out of the Shadows