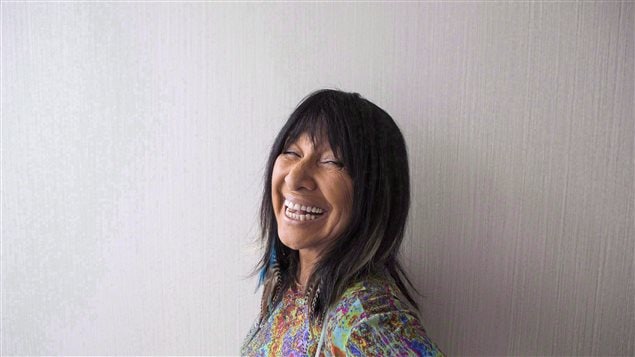 Buffy Sainte-Marie, photographed in a Toronto hotel, promoting her new album "Power in the Blood" on May 5 2015.
Photo Credit: CP / Chris Young

Buffy Sainte-Marie took home the Polaris Prize last night in Toronto, and the $50,000 that comes with it.

Her latest album, “Power in the Blood” was chosen, by a jury of 11 music critics, broadcasters and bloggers, as ‘the best Canadian record of last year”

“It’s becoming almost impossible for an artist to tour with a band and with instruments.”

Surprised and delighted, she said, “I’ve got an Academy Award and a Golden Globe, a couple of Junos and a Gemini Award — this is the only one I ever heard that gives the artist money. It’s real important, it’s becoming almost impossible for an artist to tour with a band and with instruments,” the 74-year-old aboriginal musician said.

The annual honour is awarded to the Canadian artist or band that creates the best full-length album, regardless of genre, music label or sales figures.

A singer-songwriter, activist, educator, and visual artist, Buffy Saint-Marie was a force to be reckoned with from her first album in 964,with the song “Universal Soldier”, which she wrote in the Purple Onion Coffee House in Toronto.

Blacklisted in the 1970’s by presidents Johnson and Nixon, she found it impossible to get airplay. But other people had great success singing some of her tunes. The pop hit “Up Where We Belong,” performed by Joe Cocker and Jennifer Warnes for the soundtrack of the film, An Officer and a Gentleman was co-written by Sainte-Marie.  And then there’s the ballad, ‘Until It’s Time for You to Go’ a love song that’s been recorded by countless artists including Elvis Presley.

Buffy Saint-Marie was born in Saskatchewan, and grew up in Massachusetts in the United States. The other contenders for the Polaris Prize this year, included Toronto’s rap super-star, Drake, for his latest album,  “If You’re Reading This It’s Too Late”.