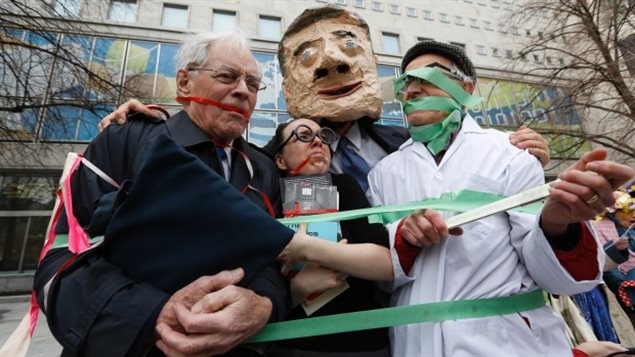 A group of protesters-- dressed as Canada's Prime Minister Stephen Harper, backbench Member of Parliament, a librarian and a scientist -- attend a demonstration against the muzzling of MPs and federal government employees in Ottawa in April 2013.
Photo Credit: Chris Wattie/Reuters

Scientists fed up with cuts to their funding and being muzzled by the Conservative government are mobilizing to highlight the issues during the current federal election campaign. This is Science Literacy Week in Canada and they deem it to be a good time talk about the importance of science and using hard evidence to make decisions.

“This election presents an unprecedented opportunity to turn the page on years of abuse and neglect of science and evidence,” says Katie Gibbs, executive director of the science advocacy group, Evidence For Democracy. “Hopefully it will be a turning point for Canada to once again be a (sic) international leader for science and research.”

Events will include bringing local candidates to universities to talk about their views on science, panel discussions, and the screening of a CBC documentary called Silence of the Labs. Scientists are encouraged to ask candidates questions, to write letters to newspapers and otherwise try to make science an election issue in their own communities.