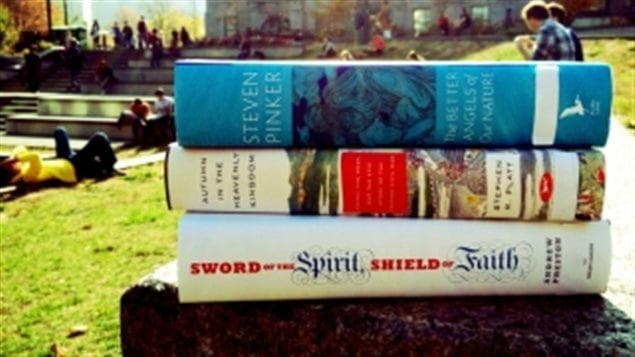 Six books have been shortlisted to compete for Canada's Cundill prize for historical literature worth US$75,000 Subjects this year range from the history of hurricanes to a new biography of a Holocaust mass murderer
Photo Credit: McGill U

Biggest award in the World.

Worth US $75,000, the Canadian-based Cundill prize is the most prestigious award for historical literature in the world.

From an initial international submission of 159 books, the shortlist of six has just been announced.

The grand prize winner will be announced in Toronto in Novermber

Professor Hudson Meadwell (PhD) is the administrative chairman of the advisory committee for the Cundill Prize. He is also the Interim Dean at the Faculty of Arts, and  Associate Professor in the Department of Political Science at McGill University in Montreal

The late Peter Cundill, a former McGill graduate and successful businessman endowed the university with funds to establish the prize, now in its eighth year.

Though still in its infancy, it’s quickly gaining stature as one of the leading awards internationally for non-fiction authors.

“The Cundill jury has selected six remarkable works of historical writing for this year’s shortlist,” said Prof. Meadwell, who serves as Administrative Chair of the Cundill Prize. “The Cundill Prize continues to identify and to reward outstanding contributions to historical understanding.”

According to the website, “The Cundill Prize in Historical Literature at McGill (Cundill Prize) was established in 2008 to recognize and promote literary and academic achievement in history. The award is offered each year by McGill University to an individual, of any nationality and from any country, who has published a book determined to have had (or likely to have) a profound literary, social and academic impact in the area of history.

The three finalists will be announced the week of October 5. The grand prize winner of the 2015 Cundill Prize will be announced at a gala awards ceremony in Toronto on Monday, November 2, at the Shangri-La Hotel. Famed Canadian author (The Massey Murder; Gold Diggers, Striking It Rich in the Klondike) and speaker Charlotte Gray will host.