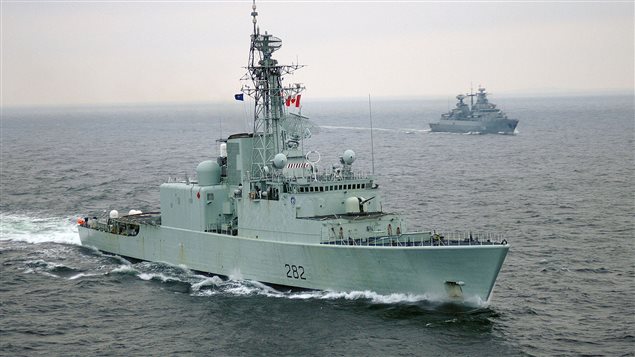 More trouble for Canada’s Navy and it’s only destroyer

To the untrained eye, HMCS Athabaskan Canada’s east coast flagship, looks like a tough fighting ship. The truth is however, that at age 43, she is tired.

The ship has experienced a series of engine problems this year; a breakdown in Florida, another recall to Halifax from an exercise in the Caribbean, and an engine room fire just a week before the latest problem.

The ship was en route to participate in two multinational exercises overseas, when one of it’s engines failed due to a lubrication problem. The ship has four engines, two main engines and two cruise engines. It was the starboard cruise engine that failed this time.

The ship is currently tied up in the United Kingdom while a repair crew prepares to replace the engine, expected to take about a week. Other issues like cracks in the hull and problems with fresh water supply for the crew have also been indicated in the past.

“It was determined that the repairs will be made immediately to allow the ship to maintain its most economical modes of propulsion while also ensuring optimal engine redundancy,” said Isaac Donnelly, a public affairs officer with the Royal Canadian Navy.

Canada’s only destroyer is scheduled to be retired in 2017.  Her two sister ships were retired in May and June of this year as being no longer seaworthy.

The Royal Canadian Navy faces other hardships. The Sea-King helicopters, slated to be retired 22 years ago, are still in service.

Canada also had two supply ships, HMCS Protecteur on the west coast and HMCS Preserver on the east coast. These ships ensured the RCN could travel long distances and remain on station. However, Protecteur suffered a serious fire and breakdown off Hawaii and was towed back to port. Because the ships were so old, the original manufacturers no long produced parts for them, and both have never left port since. A stop-gap upgrade to a commercial tanker is in the works, but proper supply ships are not expected until 2025

The RCN is now in a mid-life refit of its 12 Halifax-class frigates, which are about 20 years old. They are smaller than the destroyer, carry a crew of about 220, one helicopter (vs two on the Athabaskan) have shorter-range radar, less firepower and far less capable command abilities.

Canada has four second-hand submarines purchased  20 years ago from Britain, but these have had a poor record of service, with a series of accidents, including a deadly fire, and costs of repairs and updates about double their purchase price.

For the first time, the fleet was announced as “operational” in February of this year, meaning three of the four are able to conduct naval operations, although at that time, only one was able to fire a torpedo.

Canada has 12 Kingston-class coastal defence vessels, about a fifth the size of the destroyer with a crew of 35. Their role is surveillance, search and rescue, fisheries patrol, and training. They are also about 20 years old and have a spotty service record with chronic engine troubles.

Canada has 13 Coast Guard icebreakers, but only 6 with any polar cabability and none can travel in the Arctic in winter. The oldest, at 49, is the CCGS Louis S. St-Laurent originally scheduled for decommissioning in 2000, but it has been necessary to keep it in service with two major refits.

One heavy polar-class icebreaker is planned, (scaled back from three) but it’s original cost estimate of $720,000,000 has now doubled. It was scheduled to be launched in 2017, but the launch date is now expected to be pushed back another five years.

The effectiveness of the world’s navies are ranked on a nine-point scale called the Todd/Lindberg classification system.

The United States for example is a level-1 navy, capable capable of “global-reach power projection.”

Canada has set itself a goal of Rank-3, in a planning document called “Leadmark: The Navy’s Strategy for 2020,”. Rank-3 navies are considered as “navies that may not possess the full range of capabilities, but have a credible capacity in certain of them, and consistently demonstrate a determination to exercise them at some distance from home waters.”

In a research analysis letter of the RCN, Ken Hansen  listed the navy at a Rank-5 level,  capable of coastal defence out to a 200 nautical mile limit.  Other navies that share this capacity include Bangladesh and Indonesia, which are listed as developing nations, poor enough to be long-term recipients of Canadian aid.