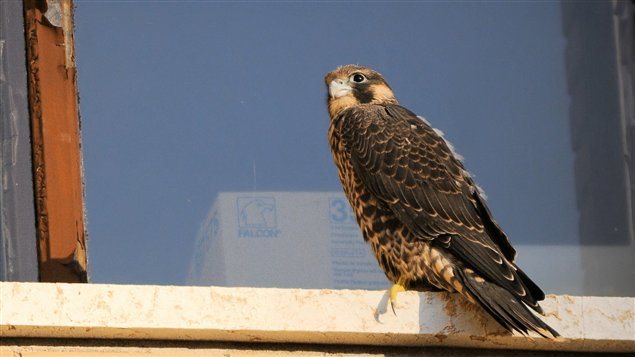 An immature peregrin falcon. The population is making a good comeback after being almost wiped out by the 1980's. An intense captive breeding programme, and the banning of DDT were major factors in the recovery
Photo Credit: via Radio-Canada

At last, some good environmental news

With a never-ending stream of worrying news about species loss and a declining environment, there is a tiny bit of good news.

The impressive peregrine falcon is making a healthy comeback from the brink of extirpation in the province of Quebec and elsewhere in North America.

By the mid 1970’s  estimates are that there were only about 375 nesting pairs throughout the continent, from a normal number of just under 4,000 nesting pairs.

DDT: the harm of indiscriminate use

As an example, in the US state of Illinois, there would normally be between 40-60 nesting pairs but by the 1980’s there were none. In southern Quebec by 1980, there was only one nesting pair.

The falcons experienced a rapid decline following the widespread use of the chemical pesticide DDT. (dichloro-diphényl-trichloroethane)

Widely used in the 1940’s and 50’s, it’s harmful effects on birds was popularized by the famous best-selling book “Silent Spring” in 1962 by Rachel Carson.

What was learned was that the toxin accumulated as it went up the food chain until it reached these raptors, where it resulted in thin and very fragile eggshells which broke causing a high mortality of embryos.

Never produced in Canada, it was nonetheless widely used on agriculture in Canada, and indeed around the world, in agriculture and to control malaria carrying mosquitoes, fleas and other pests.  After its wider harmful effects began to be realized, severe restrictions and a near ban on DDT use begain in 1972 in both the US and Canada and many other countries. From January 1, 1991 DDT could no longer be sold in Canada, and total bans were also in effect in many other countries.

In the case of the peregrines, a programme of captive breeding began in hopes of restoring the populations. Released to the wild, many of the birds have taken up residency, not in the forests and cliffs, but on high-rise structures in cities. The birds found that predators were virtually non-existant and their prey, pigeons, were plentiful.

In southern Quebec, figures released this week show 196 pairs, and a record birth of 25 chicks this summer. Equally promising is that all 25 have survived.

There may even be more as some nests are too difficult to access.

However, although biologists say the birds may be doing better now they are still vulnerable to environmental toxins which accumulate in their food chain.

Conservation groups point out that knowing one single chemical product ravaged the peregrine population in the past should be a warning about other widely used chemical products in the future.

Quebec will take another falcon population census in 2016, and given the seemingly healthy comeback, Canada may re-evaluate the bird’s status as an endangered species in it’s next analysis in 2017.