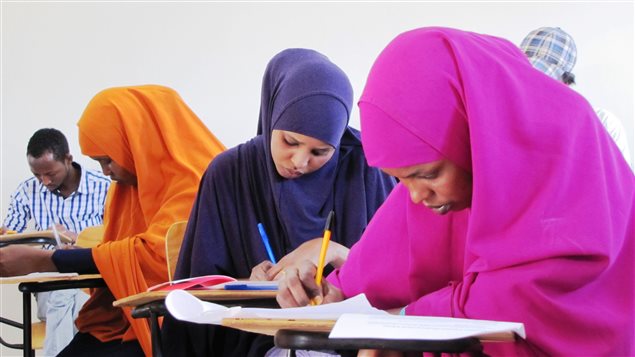 Students in the Dadaab refugee camps in Kenya are about to graduate from a unique program involving two Canadian universities. They and some residents of the surrounding area among 59 first graduates of the program which offers post-secondary education where the students live.

Many of the students are teachers in the camps and they have followed enough courses to complete the Faculty of Education program at York University. “These teachers are continuing to work as teachers in the camp and they are involved in teaching 13,000 children,” says Wenona Giles, a professor at York University’s  Centre for Refugee Studies. “And so, we are helping to improve the quality of education.”

Canadian professors from York University initially travelled to the camps to offer courses, and then students followed online courses offered by York, University of British Columbia as well as Kenyatta and Moi universities in Kenya. Each university recognizes the credits of the others, giving students more choice of courses.

York received $4.5 million in funding from Canada’s Department of Foreign Affairs for the Borderless Higher Education for Refugees project. It is a development project of the four universities, the UN High Commissioner for Refugees (UNHCR), and Windle Trust Kenya.

The project is serving as a model for others, including for Syrian refugees in Turkey and Lebanon. Another vuirtual university projet is being developed for refugees in Germany.