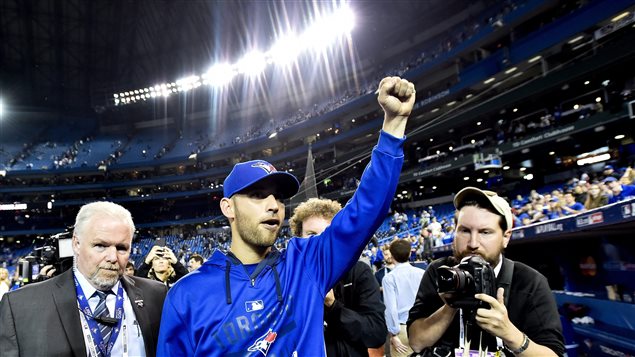 Rest easy everyone. That enormous whoosh of air you might have felt on Wednesday was not an approaching hurricane. Nor was it a giant Nike logo gone bonkers. Wait a sec, that Nike logo is swoosh, not whoosh

More likely, what you felt was Canadian baseball fans–and that apparently includes a huge segment of the population right now–letting out its collective breath following the Toronto Blue Jays 7-1 victory over the Kansas City Royals.

Lose Friday in Kansas City and the Jays are out of the hunt for a World Series victory, something they haven’t accomplished since winning back-to-back titles in 1992-93.

All Canadians can hope for now is (to quote the famous baseball philosopher and former New York Yankee catcher Yogi Berra) “Deja Vu all over again.”

Given up for dead in their previous best-of-five series against the Texas Rangers, the Jays managed to win three straight, advancing to face the Royals.

Beginning Wednesday, they faced the same challenge: winning three straight games. Or, to put it another way: put together three one-game winning streaks.

They got the first on Wednesday. They’ll try for number two on Friday. Win it, and a seventh–and deciding game–will be played Saturday.That’s number three.

For the record, Toronto is trying to become the 13th team to rally and win among the 80 who have trailed three games to one in a best-of-seven postseason series.

One of those teams was the Royals in 1985–against the Blue Jays.

A word to the wise: forewarned is forearmed. Have no fear of sudden whooshes. It’ll be just a bunch of Canadian baseball fans feeling their oats.