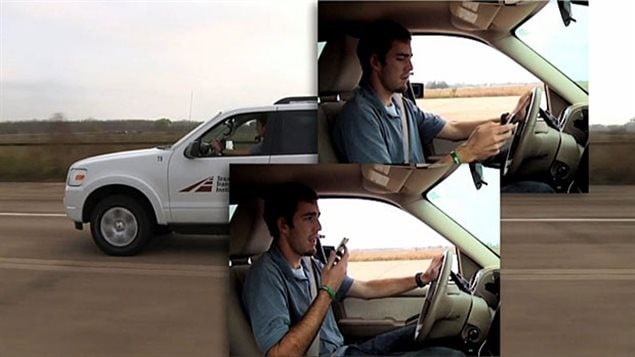 Too many teens spend too much time texting and talking on cell phones while driving.
Photo Credit: cbc.ca

Teens texting, not a pretty picture behind the wheel

We’ve all been there, blithely driving down a highway when all of a sudden the car in front of us starts weaving all over the place.

Muster up the courage to pass and–very often–we see a teen texting or talking on the phone, ofttimes moving at a brisk clip.

So are the the statistics.

The Canadian Automobile Association reports that driver distraction is a factor in four million vehicle crashes a year in Canada.

The Ontario Association of Chiefs of Police reports a driver using a mobile device is four times more likely to be in a crash that a driver who is focused on driving.

A 2013 Ontario Student Drug Use and Health Survey study conducted for the Centre for Addiction and Mental Health found that one third of all licensed drivers in Grades 10 to 12 admit to having texted while driving, a percentage that increased to 46 percent for licensed students in Grade 12.

Parachute Canada reports that teenagers, who make up 13 per cent of licensed drivers in Ontario account for about a quarter of all road-related injuries and fatalities.

Sean Tucker, an associate professor at the University of Saskatchewan, and his co-author, Simon Pek of Simon Fraser University, recently conducted a detailed look at teen’s road behaviour.

The results are published in the November edition of the journal Accident Analysis and Prevention.

Dr. Tucker spoke to RCI by phone from his home in Regina.