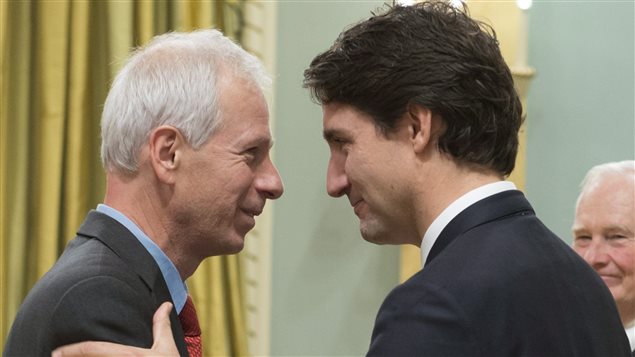 When Prime Minister Justin Trudeau named Stephane Dion to be Canada’s new minister of foreign affairs, I admit I was surprised. Like many, I was expecting Dion to take over the environment portfolio, a very sensitive file that Dion, a former environment minister in Paul Martin’s government, knows better than, perhaps, most of his colleagues.

A quiet and very reserved man, Dion didn’t strike me as an obvious choice to be Canada’s top diplomat and all the high-level schmoozing and wheeling-and-dealing associated with the position.

So to find out whether Dion has what it takes to be the minister of foreign affairs and what his nomination says about the kind of foreign policy the new Liberal government is going to pursue, I called Paul Heinbecker. He is a former Canadian ambassador to the United Nations and chief foreign policy advisor to former Prime Minister Brian Mulroney, and a man who literally wrote the book on Canadian foreign policy.

A man of intellect

“Foreign affairs is a difficult portfolio, much more difficult than it looks,” Heinbecker said in a phone interview. “It’s a portfolio above all others where you can’t control events. With other portfolios you can set some goals you can try to realize them. But if you’re in foreign affairs, you are reacting about 90 per cent of the time.”

The government’s foreign policy objectives, goals and interests are constantly tested and challenged by the outside world and events, such as the apparent bombing of the Russian passenger jet over Egypt’s Sinai peninsula, Heinbecker said.

“You have to be able to respond intelligently and preferably within the parameters of your own policy thinking and your own vision of what it is you want the country to do,” Heinbecker said. “So that takes a lot of intellect and Mr. Dion has a reputation for intellect.”

“I think it’s fair to say, although it sounds like an exaggeration, that he’s had more international experience, more under his belt, than the previous four Conservative foreign ministers taken together,” Heinbecker said.

Dion’s mastery of the environmental portfolio will also be very appreciated by his cabinet colleagues as climate change is likely to be one of the most important challenges facing the new government not only on the domestic front but also in its foreign policy, he said.

Not just a change in tone

And while Canada walked away from its traditional focus on multilateral diplomacy, Canada’s bilateral ties with its main trading partners didn’t improve either, he said.

Relations with the United States are at their lowest in decades, the Mexican president even cancelled a visit to Canada over the Conservative government’s sudden imposition of visas on Mexican citizens, and relations with China never really took off, Heinbecker said.

“So how will Canadian foreign policy change? It will change in substance,” Heinbecker said. “They’re starting with climate change, it’s an important consideration. But they have also signalled that they are going to play a more constructive way at the UN.”

Re-engaging with the world

Heinbecker said he expects Canada to start playing a more constructive role in peacekeeping by providing assistance to other militaries with its world-class expertise in logistics, communications and intelligence gathering.

Heinbecker also said he expects Canadian diplomats to be much more vocal on the international scene in promoting Canadian interests.

“One of the craziest things was that you had representatives abroad under the Conservative government, but they weren’t allowed to say anything,” Heinbecker said. “How do you expect them to represent your interests?”

Heinbecker said he expects to see changes in Canada’s Middle East policy and a return to more ‘fairminded’ approach to the Israeli-Palestinian conflict.

“The Harper government for reasons that nobody was altogether sure of decided that it would be unequivocally and unquestioningly in support of the Likud government in Tel Aviv,” Heinbecker said. “That won us one friend and lost us a lot of influence.”

Canada’s re-engagement with the world will be very welcome internationally.

“Abroad there are enormous expectations building up, people are very keen on seeing Canada get back to where it used to be,” Heinbecker said. “The world is expecting change from Canada and is welcoming that. Canada used to be seen as the constructive problem-solving country.”

As a middle power country, it’s in Canada’s interests to exist in an international system where countries live according to certain rules, where multilateral institutions act like a constraint on the great powers. Heinbecker says that the new Liberal government shows all signs that it understands this interest and is willing to re-engage with the world, instead of sitting on the sidelines and claiming to have ‘superior moral principles’.

“We’ve effectively been the world’s mother-in-law for the last ten years,” Heinbecker said. “It’s time for us to get back to constructive engagement.”

Still Heinbecker cautions not to expect changes overnight, saying the policy pursued by the previous government will take some time to correct.

For example, re-establishing diplomatic relations with Iran, after Canada pulled its ambassador from the country and expelled all Iranian diplomats from Canada in 2012, will take longer than most people realize, Heinbecker said.

“Iranians would have to agree and they were not very happy when we walked away from them, and one imagines they would be thinking twice before welcoming is us back,” Heinbecker said.

Russia and the Arctic

Building a more constructive relationship with Russia will be one of the more difficult files facing Dion, Heinbecker said.

He said Canada cannot accept on principle Russia’s claim to have a sphere of influence in the former Soviet block countries and the Kremlin’s attempts to dictate their foreign policy. On the other hand, Heinbecker says Canada has to be very realistic about its capabilities when confronting Russia over its policy in Ukraine.

However, the biggest test for Canada’s relations with Russia might come in the Arctic.

“It’s hard to predict how the Russians will behave in the Arctic,” Heinbecker said. “That’s one place where actually where Canadian interest might be directly engaged in the Arctic, rather than by the way of NATO.”

Canada really needs to invest in its capabilities in the Arctic and do that without provoking Russia, he said.

“The Harper government’s emphasis on the Arctic was basically photo ops,” Heinbecker said. “We’re building one icebreaker, the Russians are building 14. We had a military exercise in the Arctic in which we deployed 200 soldiers, they had one in which they deployed 35,000.”