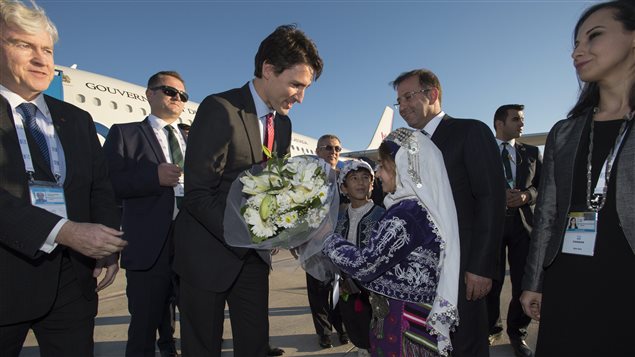 Prime Minister Justin Trudeau is presented with flowers as he arrives in Antalya, Turkey on Saturday, November 14, 2015, to take part in the G20 Summit.
Photo Credit: PC / Sean Kilpatrick

Even before Prime Minister Justin Trudeau set foot on the government jet to take him to the G20 summit in Turkey for his diplomatic début, he had to deal with his first major international crisis involving a close ally as news of the deadly attacks in Paris reverberated throughout the world.

The attacks, which have been claimed by ISIS, come at a very awkward moment for Trudeau, who’s vowed to pull Canada from the U.S.-led bombing campaign against ISIS in Syria and Iraq and concentrate on training Kurdish and Iraqi forces instead. France is a founding member of that coalition and French President Francois Hollande, who has cancelled his participation at the summit, is promising to wage a “merciless” campaign against “the barbarians of Islamic State group.”

On Friday evening before leaving Ottawa, Trudeau was asked whether he would reconsider withdrawing Canada’s CF-18s from the fight against ISIS or repealing parts of Bill C-51, Canada’s anti-terrorism legislation, as promised by the Liberals during the election campaign.

“It’s too soon to jump to any conclusions,” Trudeau said. “But obviously governments have a responsibility to keep their citizens safe while defending our rights and freedoms. And that balance is something that the Canadian government and indeed all governments around the world will be focusing on.”

Trudeau is also sticking to his plan to bring in 25,000 Syrian refugees to Canada before the end of the year.

“It’s also an important one seen from the perspective of what the prime minister had decided regarding our contribution to the fight against ISIS in Iraq and Syria,” de Kerckhove said. “To the extent that even though we are pulling out our planes, I would presume the prime minister would want to reassure his colleagues that we will be doing more training more training as we’ve done before.”

De Kerckhove said another important discussion that would take place at the summit is how to use financial means to cut the funding to ISIS.

“If you want to degrade ISIS and eventually destroy it, you need to cut the financial flows, particularly the oil revenues that are being made, which by the way go to Turkey as well,” de Kerckhove said.

Then on Nov. 18-19, Trudeau will be in the Philippines for the Asia-Pacific Economic Cooperation (APEC) Leaders’ Meeting where he is to meet with leaders from the region and hold bilateral talks with U.S. President Barack Obama, their first meeting with since Trudeau became prime minister and Obama rejected the Keystone XL pipeline.

The two leaders have spoken on the phone at least twice – once shortly after Trudeau was elected and a second time last week, when Obama informed him of his Keystone decision. Trudeau, in turn, has informed Obama he will be pulling out Canadian fighter jets from the U.S.-led aerial bombing campaign against ISIS in Syria and Iraq.

“The APEC summit will be the firs opportunity for the prime minister to talk about our perspective on Asia,” de Kerckhove said.

Even though during the election campaign not much was said about Canadian policy in Asia, de Kerckhove said there is a sense that Trudeau will not be repeating the mistakes made by the Harper government in its first mandate, when it ignored China but then was forced to play catch up with other countries.

Trudeau flies back to Canada for a different kind of a diplomatic challenge, this one involving Canada’s provincial and territorial leaders ahead of the United Nations climate change summit in Paris later in the month. Trudeau has invited the leaders to attend the so called COP 21 summit but getting them to agree on a common strategy for the reduction of greenhouse gases will be easier said than done.

“Having the premiers in town might make it more difficult to have some very precise commitments, but on the other hand, it would help from the domestic perspective to show a kind of a united front or at least a commitment by the provinces and the federal government to come together maybe after Paris and decide what can be actually achieved, decided and implemented,” de Kerckhove said.

Then on Nov. 27-29: Trudeau attends the Commonwealth Heads of Government meeting in Malta, but on his way there he’ll make a stop in London on Nov. 25 for a meeting with the Queen at Buckingham Palace.

Then he takes off to Paris for the COP 21 summit, which will present Trudeau with the most visible platform to set a new tone and course on climate change.

Selecting Catherine McKenna as the new Minister of Environment and Climate Change instead of going with Stéphane Dion, who as former Liberal environment minister is the most knowledgeable on this file, was a shrewd political choice that will give Trudeau room to manoeuvre at the summit in Paris, de Kerckhove said.

“One, he wanted to have a new face, a younger face at that critical department,” de Kerckhove said. “And by not having Dion, who is an old hand and knew the stuff, he could also plead that this is very early games and therefore we can go for broad-based commitment, but a non-specific one, while the Europeans would expect Canada to come with specifics.”