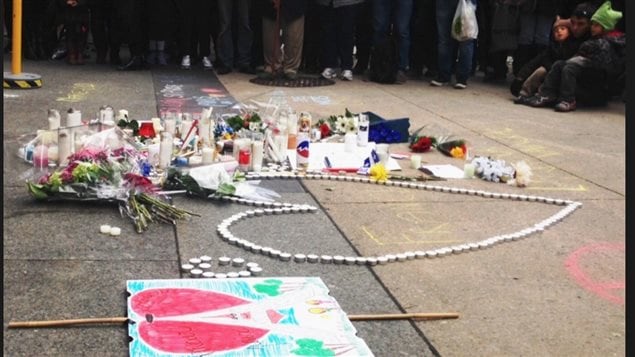 Many people in Quebec City gathered at the French embassy in solidarity with the people of France.
Photo Credit: CBC

The horrific attacks in Paris on Friday November 13 have shocked the world. It was the second deadly terror attack in France this year following the murders at the Charlie Hebdo magzine,  and one of the most deadly attacks in Europe since the 2004 Madrid bombings. The weekend attacks are attributed to ISIS, now being referred to by world leaders as “Daesh” a transliteration of the Arabic acronym for ISIS, and is considered by ISIS as an insult to them.

Ray Boisvert is an expert in national and international security matters. He is the former Assistant Director of Intelligence at the Canadian Security Intelligence Service (CSIS), and now senior associate at Hill and Knowlton Strategies, a strategic communications consultancy.

The question is often raised that if certain individuals were known to have terrorist links, why weren’t they stopped?  As Mr Boisvert points out, reality is not like the TV spy and police shows.

He says to properly monitor an individual, it takes literally dozens of people and extensive resources. He says when there are so many to monitor, they simply overwhelm resources, and “it is beyond your capacity to keep an eye on all potential plotters”

Reports are that at least one of the attackers came to Europe last year as part of the ongoing wave of migrants and refugees and was found with a Syrian passport near his body.

Ray Boisvert says it’s still too early to be sure of the situation and that the vast majority of these asylum seekers pose no risk. He does say however that the possibility of terrorists infiltrating the ranks of migrants exists.

France meanwhile, has declared this an act of war, a sentiment seemingly echoed by US President Obama. France immediately launched an air attack in retribution against apparent ISIS training bases.

Canada under the newly installed government, previously has said it will pull its fighter jets out of the bombing campaign against ISIS, and Boisvert says this puts us in a delicate situation: pulling out could send the wrong signal to ISIS now that they have succeeding in “scaring Canada off”. However if France invoked Article 5 of NATO, Canada could be obliged to re-enter a military campaign.

He says, the situation has surely dominated the current G20 summit in Turkey.

The situation will also surely dominate and modify the discussion previously planned for  next week’s Halifax International Security Forum (November 20 to 22, 2015), where officials, military and security agencies will gather together to exchange ideas on how nations can collectively address the pressing security challenges facing us all.