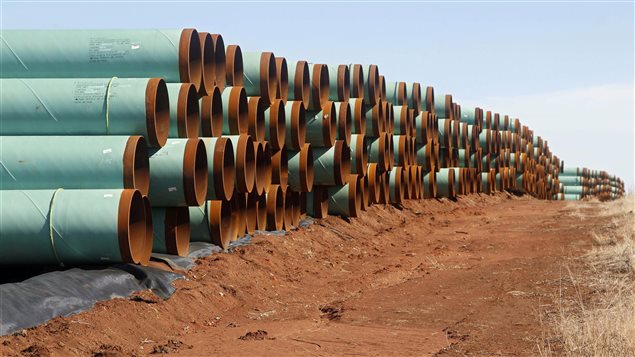 Miles of pipe for the rejected Canada-to-Texas Keystone XL pipeline are stacked in a field near Ripley, Okla., In this Feb. 1, 2012 file photo.
Photo Credit: Sue Ogrocki

Speaking on a teleconference call from Paris, Jim Carr said the National Energy Board will continue the review of applications for TransCanada’s Energy East and Kinder Morgan’s Trans Mountain pipeline projects to bring oil from land-locked Alberta and Saskatchewan to ports on Canada’s Atlantic and Pacific coasts respectively.

“They have not stopped. The process continues,” said Carr after being prompted several times to clarify the government’s position.

“There will be a transition as we amend the ways in which the National Energy Board goes about the process of evaluating these projects and we will announce those changes as soon as we can. But the process continues.”

Carr, who was in Paris to attend an International Energy Agency ministerial meeting ahead of the COP21 climate change summit, appeared less clear when asked by Reuters about the Energy East pipeline project.

“I understand that any changes that we make to the process will have an effect on projects. I know that it’s important, and we will be reviewing the situation and we will give you the results as soon as we can,” he said.

However, there was no ambiguity in Carr’s rejection of Enbridge’s proposed Northern Gateway pipeline to bring oil from northern Alberta’s oil sands to the deep-water port of Kitimat B.C.

The focus on Energy East and Trans Mountain has intensified in the wake of U.S. President Barack Obama’s rejection of the Keystone XL pipeline.

“We’re in favour of a process that’s more inclusive because our goal is to help Canadians be confident in the regulatory process,” Carr said.

Carr said he met his American and Mexican counterparts in Paris this week to discuss a continental approach, which included energy security and sustainability.

“We agreed on an agenda,” he said. “I have invited them to both to come to Canada for the next trilateral meeting sometime early in the new year when we will flesh out the details of our agenda.”