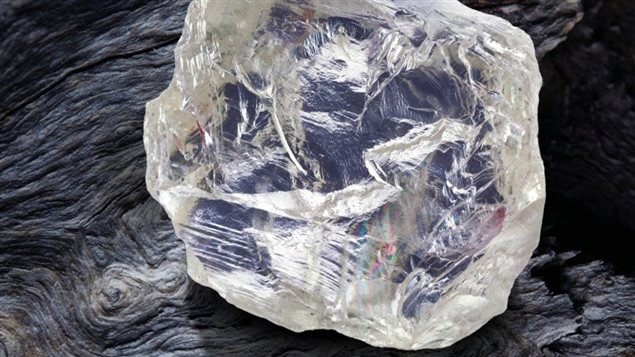 The 187.7 carat gem-quality rough diamond, known as The Diavik Foxfire, was discovered at the Diavik Diamond Mine in the remote Northwest Territories of Canada.
Photo Credit: Hand-out (CNW Group/RIO TINTO PLC)

The largest diamond ever found in Canada made its international debut at an exclusive preview at Kensington Palace in London Wednesday.

The 187.7 carat gem-quality rough diamond, known as The Diavik Foxfire, was discovered at the Diavik Diamond Mine in Northwest Territories, about 220 km south of the Arctic Circle.

“We are delighted to showcase this exceptional, two billion-year-old Canadian diamond,” said in a statement Jean-Marc Lieberherr, managing director at Rio Tinto Diamonds, which has a 60 per cent stake in Diavik. “Its ancient beginnings, together with the fortitude, finesse and innovative technology required to unearth a diamond in the challenging sub-arctic environment, make it a true miracle of nature.”

The Diavik Foxfire has also been bestowed an indigenous name, Noi?eh Kwe, which in the Tlicho language means the Great Caribou Crossing.

“I am very pleased that this has been named to honour the area of the caribou crossing, as this has been important to the Tlicho since time immemorial,” Tlicho Grand Chief Edward Erasmus said in a statement.

After its showcase in London, the Diavik Foxfire will return to Antwerp, the world famous centre for diamond cutting and polishing. The 187.7 carat rough diamond is expected to yield at least one very large polished diamond with, its ultimate destiny in an exclusive heirloom piece of jewellery, Rio Tinto officials said.

Ontario joined Canada’s diamond club in 2008, when De Beers started commercial diamond production at its Victor mine, about 90 kilometres west of the First Nations community of Attawapiskat, in northern Ontario. And Quebec is expected to join Canada’s diamond producing club once the Renard Mine owned by Stornoway Diamonds becomes operational in 2016.

Dreams made of diamonds