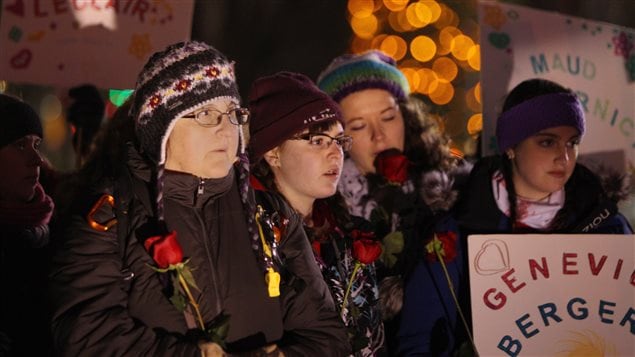 Last year and every year on December 6 there is a gathering in Montreal to remember the 14 female students shot to death at an engineering school.
Photo Credit: Dave Chidley/Canadian Press

Marc Lepine murdered 14 female engineering students in 1989, then shot himself and his mother still doesn’t know why. “Maybe he felt unloved, left aside,” said Monique Lepine speaking at an event to end violence against women held in the northwestern city of Whitehorse.

Every year on December 6th, a memorial is held to remember the young women who were separated from the men in a university classroom in Montreal and shot with a 223-calibre Sturm-Ruger rifle. Ten other women and four men were wounded. The 25-year-old Marc Lepine screamed about his hatred for feminists and then went on the shooting spree.

Lepine has said her son was severely beaten by his father. She and her children suffered abuse at his hands. She said her daughter killed herself with a drug overdose seven years after the massacre, having suffered guilt about not having reconciled with her brother.

Lepine said she realized the next day that she had lost the children she had dedicated her life to. Reflecting on her son’s actions she said “If you didn’t solve your emotional problems when it was the time, eventually you’re growing, you’re an adult, but emotionally you’re still at the age of your wound.”

Heidi Rathjen was a survivor of the massacre and went on to campaign hard for gun control in Canada.