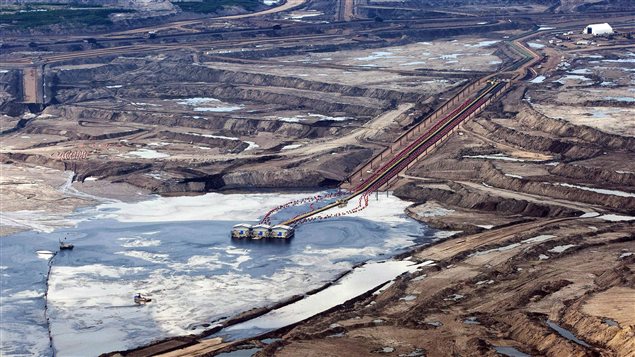 Alberta's oil sands are in trouble. This facility, seen from a helicopter near Fort McMurray in July 2012 illustrates the scale of the industry. It's been about a year since the price of oil started its nosedive to below US$50 a barrel.
Photo Credit: CP / Jeff McIntosh

Alberta suicide rate up 30 per cent

Alberta’s suicide rate soared this year and public health officials fear the trend will continue. The economic turmoil in the wake of collapsing oil prices has hit many people in the province hard. Mass layoffs, that few saw coming, are wreaking havoc in homes and families. The price of a barrel hit a new six-year low today.

Mara Grunau, head of the Centre for Suicide Prevention in Calgary, said, “This is staggering,” In an interview with CBC she said, “It’s far more, far exceeds anything we would ever have expected, and we would never have expected to see this much this soon.”

According to the energy sector itself, over 40,000 layoffs have taken place this year.

The statistics revealed that in the first six months of 2014, there were 252 suicides in Alberta. During the same period this year there were 327. According to the Centre for Suicide Prevention, there are 500 suicides a year in the province, but if the trend continues mental health workers forsee as many as 654 this year.

The Calgary Distress Centre is receiving more calls, many with a change in tone, according to Counsellor David Kirby.

“For me it says something really about the horrible human impact of what’s happening in the economy with the recession and the real felt effect, the real suffering and the real struggle that people are experiencing,” he told CBC.

Demand for counselling has increased by 80 per cent — and the problems are more complex. “There might be substance abuse issues. There might be imminent financial collapse,” he said.

“Anxiety, depression. relationship conflict, maybe concurrent domestic violence. So there are many more things that people are trying to juggle I think at the same time.”

Nancy Bergeron has answered the distress centre phone lines for a few years now. She says this year has been the hardest. “People are just at wit’s end and they’re contemplating it, right?”

Most major oil companies, aware of the challenges, have cancelled their Christmas parties.

The University of Calgary is observing a similar trend with many students working several jobs in an effort to keep a roof over their head. With demand for counselling services up 29 per cent, the university launched a campus-wide mental health campaign.

Mara Grunau, however, is optimistic the trend can be curbed as the province has increased its budget for mental health.

“In the budget we saw money specifically earmarked for mental health and we’re hoping that some of it will be directly put into suicide prevention.”

That could mean more resources for distress centre workers like Bergeron. “We want to be able to interject and kind of break that thought process and say, “Hey, you know what? There’s other things. You don’t have to end your life.”

But workers are also aware that December can be one of the most stressful months of the year, with expectations and obligations around the holidays that push many people into crisis.

The office towers in Calgary are emptying. Most major oil companies, aware of the challenges, have cancelled their Christmas parties this year. Some are going ahead with very scaled down versions of the holiday celebration.