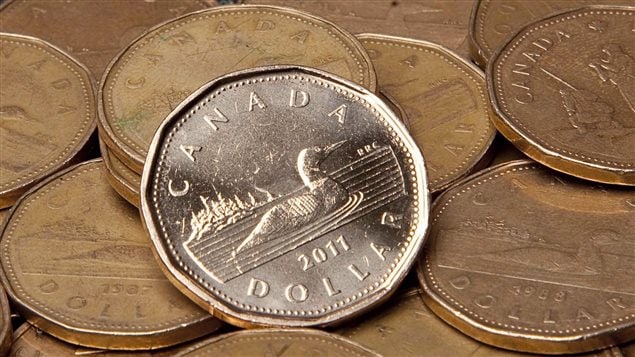 The dollar was trading at 73.99 cents US around midday on Monday. That’s the first time the loonie has slipped below 74 cents US since June 2004.

U.S. benchmark West Texas Intermediate oil dropped $2.22 US to below $38 a barrel, setting a new low for the year and hitting its lowest level since 2009, as energy markets digested Friday’s failure by the Organization of the Petroleum Exporting Countries to limit oil production.

The collapse in oil prices is driven by an oversupply of oil in the global markets of up 1.5 million barrels per day, said Dinara Millington, vice-president of research at the Canadian Energy Research Institute. Overall the oil glut was caused by the shale gas revolution in the United States and the attempt by the OPEC countries to maintain their market share, Millington said.

(click to listen to the full interview with Dinara Millington)

Members of the increasingly fractious cartel are currently pumping out about 31.5 million barrels a day. The cartel’s 13 member countries have set aside any talk of a production cap until at least its next group meeting, currently scheduled for June, OPEC president Emmanuel Ibe Kachikwu told reporters over the weekend.

Historically OPEC has acted as a swing producer and has more or less successfully managed the oil market for by capping the amount that it allows to enter the market, Millington said.

Although its influence has been diminished by concerted efforts in non-OPEC nations such as the U.S. and Canada to pump out more oil, OPEC still controls about a third of the market.

“With the last price collapse it was sort of almost expected that the OPEC members would react in a similar manner but they didn’t” Millington said. “They were protecting the production levels coming from their member countries more so than the level of prices.”

It’s believed that the cartel was willing to see oil prices crater in an attempt to drive U.S. shale producers out of business, because the latter have much higher production costs and can’t stay profitable for long in a cheap oil environment.

Threats to the Canadian economy

Further declines in oil prices threaten Canada’s fragile economic recovery. While the cheap dollar has helped Canadian manufacturers and the service industry by making their goods and services more affordable for foreign buyers, the loss of income in the energy sector has made companies a lot more shy to invest in capital-intensive resource sectors.

The falling oil prices are particularly bad news for the economy of oil-rich Alberta. The province, which had become Canada’s economic engine in the last few years, suffered a recession this year and has seen its unemployment rate spike to 7 per cent from 4.5 per cent at the start of the year.