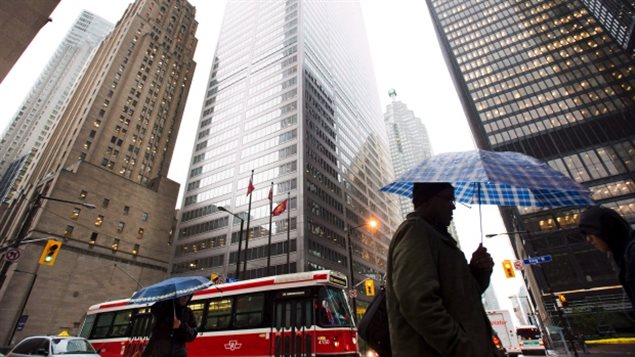 Canada's six major banks and lenders dominate the skyline on Bay Street in Toronto. Profits are in the billions, and so are executive bonuses again this year
Photo Credit: Nathan Denette/Canadian Press

Nice work if you can get it. Canada’s big bank bonuses

While economies were stumbling in countries around the world, Canadian banking did quite alright indeed. And, so did executives, with billions of dollars in bonuses paid out.

Various aspects of bank business did well, including operations which expanded into US markets, such as TD which now has more branches in the US than Canada,  retail and business loans performed well. While the federal Bank of Canada dropped its loan rate by half a point, the commercial banks only dropped their rates by 0.3 percent.

In addition, most of the banks raised their fees.

As for executives, it seems the base entrance salary for a new CEO is down slightly from $1.5 million to just $1 million, but with bonuses ranging from eight to ten million.

CIBC came in for some criticism recently for high compensation packages for outgoing execs; the retiring CEO was handed $16.7 million, and the outgoing Chief Operations Officer (COO) was given an $8.5 going away present.

Such lucrative benefits may be under scrutiny in future, but annual bonuses still are very generous.

Bonuses across the board for executives at the bank were increased only slightly this year, but top management at the banks will share in some $12.5 billion dollars in bonuses.

With files from Bloomberg news