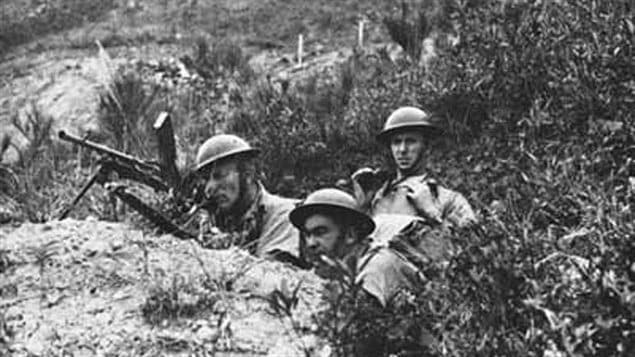 Canadian troops on Hong Kong with Bren gun. and Lee-Enfield bolt action rifles, probably during an exercise. The inexperienced defenders held out for more than 17 days against overwhelming numbers of hardened Japanese invaders.

One of the most recognized phrases in history is that of U.S. President Roosevelt on December 8th, 1941 in response to the surprise attack on Pearl Harbour. Japan had not issued a declaration of war prior to the surprise attack and Roosevelt’s historic speech to Congress was short, and  began with the phrase, “Yesterday, December 7, 1941 — a date which will live in infamy..”  Within the hour, the US had formally declared war on Japan.

What is lesser known is that almost simultaneous to the attack on Pearl Harbour, the Japanese army had begun an attack on the British colony of Hong Kong, again with no prior issuing of a declaration of war.

In fact, the night before Roosevelt’s  speech and the subsequent U.S. declaration of war,  the Canadian Prime Minister had informed both King George VI and Japanese officials that Canada was at war with Japan. A formal Canadian proclamation was announced on December 8th.

Between the wars Britain began to realize that Japan was a growing threat and that its colony on Hong Kong was in danger. This threat grew even larger as Japan attacked and brutally occupied much of China starting in 1937.

Initially, British planners said that the colony and island of Hong Kong could not be successfully defended and so reduced the garrison there to symbolic size.

In 1941 they changed their mind and asked Canada to send two infantry battalions and headquarters to fortify defences with about 2,000 men.

For the garrison, Canada sent the Royal Rifles of Canada and Winnipeg Grenadiers.   The two groups were ill-prepared when they arrived in November, having served only garrison duty in Newfoundland and the other in Jamaica and had no real training as front line troops, and with much of their equipment  aboard another ship diverted.

On the morning of December 8,  (Dec. 7 in North America)  the Japanese began their invasion of the colony.

Thus the defenders became the first Empire troops to see action in the Second World War.

For their part, the Japanese troops were already battle hardened, experienced, and organized from years of war in China.

They also outnumbered the inexperienced defenders by at least four to one and had vastly more resources.

The British, Canadian, and Indian defenders had neither air nor naval support, but fought off the onslaught as best as they could. The immense courage and ability exhibited by the defenders cannot be underestimated, but the weight of the Japanese attack pushed them off the mainland after a week of bitter fighting.

On the island, they continued to resist with great courage even as resources dwindled.

As the battle raged, the Japanese callously murdered a number of surrendered soldiers and later tortured and killed sick and wounded soldiers and civilian hospital staff at the St Stephens College field hospital. Rape and murder was widespread during and after the battle.

The garrison force held out with water, ammunition and other supplies almost gone, until it proved impossible to continue. Hong kong was surrendered on December 25th.

Surrender however proved not to be a respite.

For the next three and half years, the Canadian, British and other Commonwealth soldiers suffered extreme brutality at the hands of their captors, often used as slave labour, while civilians were also subject to brutality, rape, and murder.

Of the 1,975 Canadians who sailed to Hong Kong, more than 550 never returned, and many others were physically and psychologically scarred for life.

After making many apologies to other nations for its actions in the war, Japan apologized to Canada for its treatment of prisoners on December 8th, 2011