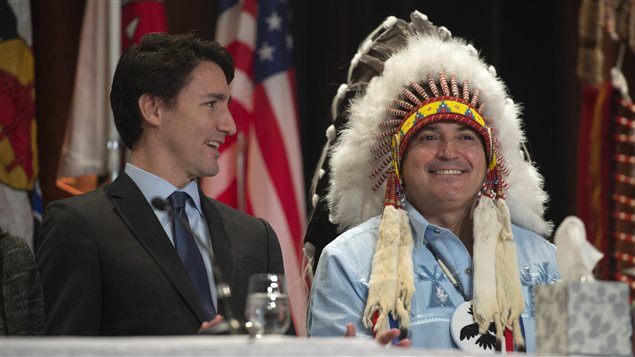 Prime Minister Justin Trudeau unveiled a five-point plan on Tuesday to reset Canada’s relationship with its indigenous people during his address to a group of First Nations leaders in Gatineau, Que.

“It is time for a renewed, nation-to-nation relationship with First Nations peoples, one that understands that the constitutionally guaranteed rights of First Nations in Canada are not an inconvenience but rather a sacred obligation,” said Trudeau to hundreds of chiefs and other First Nations delegates at the annual three-day gathering organized by the Assembly of First Nations.

“We can’t afford to wait and we won’t,” Trudeau said. “Every child and young person living in Canada deserves a real and fair chance at success, First Nations students are no less deserving.”

He also promised to lift the controversial two-per-cent funding cap for First Nations programs in his first budget.

“As you know, that limit has been in place for nearly 20 years,” Trudeau said “It hasn’t kept up with the demographic realities of your communities, nor the actual costs of program delivery.

“It’s time for a new fiscal relationship with First Nations that gives your communities sufficient, predictable and sustained funding.”

Trudeau reiterated his pledge to implement all 94 recommendations flowing from the Truth and Reconciliation Commission.

“Where measures are found to be in conflict with your rights, where they are inconsistent with the principles of good governance, or where they simply make no public policy sense, we will rescind them,” said Trudeau, garnering applause.