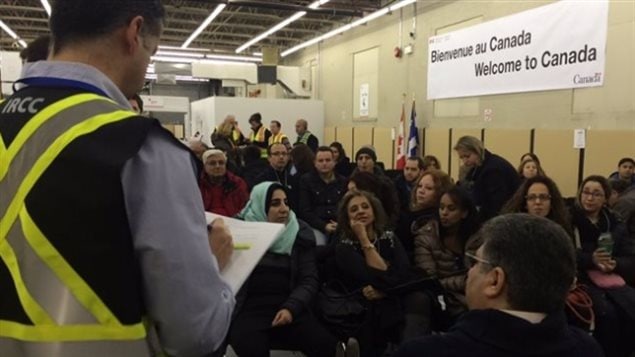 Newly-arrived refugees wait to be processed at Montreal’s airport on Dec. 12, 2015. Most are privately-sponsored.
Photo Credit: Radio-Canada

Pros and cons of two kinds of refugee experience

Of the 25,000 Syrian refugees Canada has promised to settle in the coming months, some are sponsored by the government and some by private groups and individuals. Their experiences may be different as may be their eventual earning power.

Government-sponsored refugees are given funding for up to one year to cover their housing costs, food and transportation. They also have access to paid professionals who work full-time for settlement agencies and have wide experience helping refugees.

Anyone can privately sponsor a refugee if they promise to provide the funding to support the newcomers for a fixed period of time. Sometime friends get together to do this, or it may be an initiative by a church, mosque, or other religious or community group. They may have less experience than do professionals, but they often have more time to offer. They may have bigger social networks and offer more help with the day-to-day mundane tasks.

There are advantages and disadvantages for both groups, says Prof. Jennifer Hyndman, director of the Centre for Refugee Studies at York University in Toronto. Privately-sponsored refugees, she says, tend to get jobs more quickly but that can be a disadvantage.

Feeling pressure may have a down-side

“One rarely-spoken of possibility is the pressure that privately-sponsored refugees face. They know that their sponsors have put up time and money to assist them. And they also know that there are a lot of people in the queue behind them—families that also need to be sponsored,” says Hyndman.

“They know they need to become self-sufficient as soon as possible. So there is that pressure. And the one down-side of that pressure is that people might get into a job very quickly, but it might be a bit of a dead-end job or it might be a job that precludes them from taking English or French as a second language which, in the long-term, can get them a better job.”

People meeting two planeloads of refugees have greeted them with much enthusiasm and good will. While it may be a bit overwhelming for tired travellers, Hyndman says most show amazing resourcefulness, and they are grateful for the help they get.