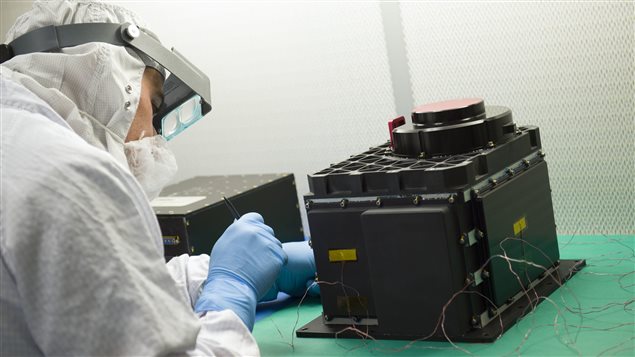 Canadian laser on its way to explore asteroid

A Canadian-made laser mapping system to help explore a distant asteroid on a possible collision course with Earth is getting ready for a long space voyage.

The Canadian Space Agency (CSA) has delivered the sophisticated instrument as part of its contribution to a NASA mission that will be Canada’s first international attempt to bring a sample of an asteroid to Earth.

NASA’s Origins-Spectral Interpretation-Resource Identification-Security-Regolith Explorer (OSIRIS-REx) mission will study Bennu, an asteroid that has a one-in-2700 chance of impacting Earth in about 200 years.

The OSIRIS-REx Laser Altimeter (OLA) has arrived at the Lockheed Martin Space Systems facilities near Denver, Colorado. In the coming months, OLA will be integrated onto the spacecraft and undergo spacecraft-level testing in preparation for launch in September 2016.

(click to listen to the full interview with Prof Michael Daly)

It works firing short laser pulses that can measure precisely the distance to the surface by timing the delay for the light to bounce back from the surface to the sensor. The CSA says OLA will scan and measure the entire surface of the asteroid to create a highly accurate 3D model of the asteroid, and provide mission scientists with unprecedented information on the asteroid’s shape, topography, distribution of boulders, rocks and other surface features.

“Previous laser altimeters have been point altimeters, they stare in one direction and they take measurements typically at one Hertz to 10 Hertz rate,” said Daly.

Built for the CSA by MacDonald, Dettwiler and Associates Ltd. and their partner, Optech, OLA will create 3D maps of Bennu.

“This asteroid is about about 500 meters in diameter, so throughout the mission we’ll build a whole globe of the asteroid complete with its topography superimposed on the globe,” said Daly. “This helps us to understand what the surface of the asteroid is like and the geology of the surface which will support our spacecraft going down and grabbing a sample.”

The Canadian instrument will also play a crucial role in choosing the location where the spacecraft will touch down to scoop up a sample.

The spacecraft will be touching the surface of the asteroid for only about five seconds.

The CSA, which invested $61 million in the project, will own a portion of the 60g returned sample, which will be studied by Canadian scientists.

OSIRIS-REx is expected to reach Bennu in late 2018. The sample will return to Earth in 2023.